Israel and Hamas Caught in a Deadly Embrace 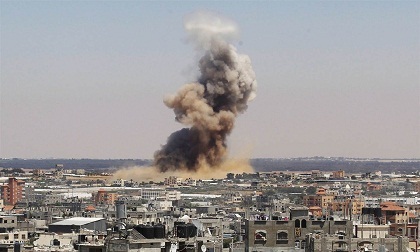 Hamas rocket and mortar attacks on Israel may force the Jewish state, unable to quell the relentless fire with retaliatory air strikes, to invade the Gaza Strip and open up a long and deadly conflict.

- What are Hamas's objectives?

"To survive," says Israeli security analyst and commentator Daniel Nisman, who says the Islamist group is up against the wall in Gaza, short on funds and isolated after the new regime in neighboring Egypt crushed Hamas's patron, the Muslim Brotherhood.

Hence its need to deliver "victories" to impress Palestinian public opinion, he adds.

This could involve a softening of the Israeli and Egyptian blockades on the enclave, or a spectacular military coup, such as shooting down an Israeli warplane, infiltrating a commando into Israel or hitting downtown Tel Aviv with rockets.

In the end, "Hamas has nothing to lose," says Mukhaimer Abu Saada, a political scientist at Gaza's Al-Asa University.

- What are Israel's objectives?

At the end of the day, "Hamas should no longer have the means to produce rockets," says Gilad Erdan, home front defense minister and a member of the security cabinet.

Israel is preparing for a lengthy campaign, unlike Operation Pillar of Defense in November 2012, which lasted less than two weeks, and Prime Minister Benjamin Netanyahu has called on his fellow citizens to be patient.

Two types of invasion are possible:

The first would be a long-term campaign that aims to completely eradicate from Gaza Hamas's infrastructure. The other, more acceptable to Israeli public opinion, would be shorter and aimed at only weakening the military capacity of militant groups in Gaza.

Abu Sada says Hamas "figures that Israel will not launch a ground campaign to reoccupy the Gaza Strip, which would be practically impossible to achieve and carry an exorbitant cost."

Nisman adds that the initiation of any such action could be accelerated if "a rocket hits central Tel Aviv or with the first Israeli being killed."

Hamas, thought to have an arsenal of around 10,000 missiles, has the capacity to hold out for around six weeks, according to Israel defense experts.

The group surprised Israel with the launching of rockets on the north of Israel, more than 160 kilometers (100 miles) from Gaza.

But Nisman says those longer-range, more precise missiles will be used sparingly, while Hamas will not hesitate to "fire the rest of its arsenal without counting."

Meanwhile, Amos Gilad, strategic affairs director at the Israeli defense ministry, considers it unlikely that Hamas will get any support from Lebanon's Hizbullah in the form of missile strikes on the north of Israel.

- Is there any mediation?

All eyes have been turned on Egypt, but it has downplayed any hopes of a Cairo-mediated end to this dispute despite having played a role in bringing about ceasefires in the past.

"There is no mediation, in the common sense of the word," said foreign ministry spokesman Badr Abdelatty.

"Egyptian diplomatic efforts are aimed at immediately stopping Israeli aggression and ending all mutual violence. (Egyptian) contacts have not yet achieved a result," he added.

And Nisman said any such mediation would be fruitless because Egypt under former army chief and newly elected president Abdel Fattah al-Sisi made clear to Hamas last week that it would not put excessive pressure on Israel.

In that case, Abu Sada said, Hamas could turn to Palestinian President Mahmud Abbas and his Fatah movement, or even to Turkey.