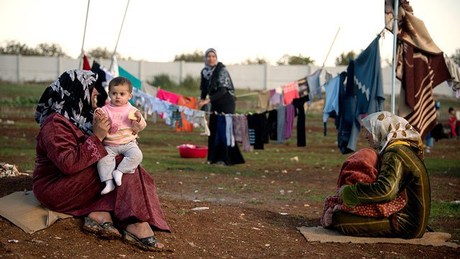 The population of Syria's coastal provinces, relatively untouched by the country's war, has shot up by 50 percent, sheltering one million displaced people, the International Committee of the Red Cross said Friday.

"Over a million people have arrived in Latakia and Tartus since the beginning of the conflict, swelling the local population by 50 percent," the ICRC said in a statement.

ICRC water engineer Patrick Luisier warned of the impact the influx has had, creating difficulties for both for the displaced and locals.

"Local resources are severely stretched and the authorities are struggling to cope with the most recent influx of families fleeing Aleppo and other areas directly affected by the violence," he said.

Most of the displaced who have sought shelter on the eastern Mediterranean coast are living in temporary shelters.

"Many families arrive here with very little, and living conditions in most shelters are difficult," Luisier added.

Syria's coastline is the heartland of President Bashar Assad's regime and of his minority Alawite sect.

With much of Syria engulfed in fighting and daily bombardment, few areas have remained relatively calm, among them much of Latakia and Tartus provinces.

The ICRC said it is distributing food, blankets, mattresses, cooking sets and hygiene kits in the coastal region.

In June, the ICRC and the Syrian Arab Red Crescent assisted 160,000 displaced people in Latakia and Tartus.

Syria's conflict began in March 2011 with peaceful protests demanding Assad's ouster that morphed into an armed uprising after the regime unleashed a brutal crackdown against dissent.