Security Forces Deploy Heavily in Tripoli amid Arrests of Suspects 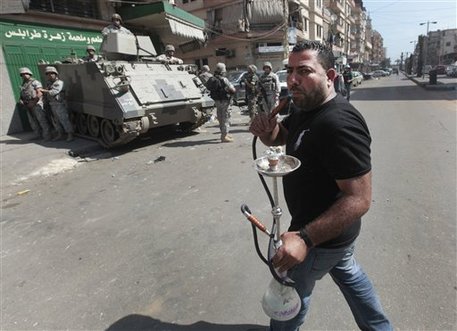 Security forces staged a number of raids in the northern city of Tripoli on Friday in search of wanted suspects and in light of recent rallies in the city that demanded a halt to the “arbitrary” arrests taking place there.

MTV reported that a suspect was arrested during a raid on the government hospital in the district of al-Qobbeh.

The security forces inspected the identification cards of pedestrians in search of wanted suspects.

Meanwhile, a leading member of the Mustaqbal Movement told MTV: “Tripoli is not an extremist city. Its residents support the continuation of the security plan in order to achieve justice and see the suspects put on trial.”

The Islamic National Gathering slammed on Thursday the “arbitrary arrests targeting the sons of Tripoli”, warning that the “oppression of the Sunni sect will result in unexpected reactions.”

"We reject the arbitrary arrests of Tripoli's sons and we hold the Attorney General of the court of cassation and the judges fully responsible for any Sunni's detention,” Mustaqbal bloc MP Mohammed Kabbara announced after a meeting with the northern city's figures.

The Mustaqbal bloc had said on Tuesday that many of the arrests in Tripoli were based on investigations that were conducted under psychological and mental pressure, considering that this resulted in launching accusations of terrorism against people “who were merely tasked with carrying guns.”

We have one monster in Lebanon called Hezbollah. The state need to make sure that an equivalent Sunni monster (in the form of a Sunni militia) does not take hold. Otherwise Lebanon will be in ruin with these two monsters fighting it out. Bluntly, I want Lebanon first. The Hizbis and their supporters have Lebanon 3rd or 4th.

yes sure it means waging sectarian wars, killing women and children, undermining the state and its authority, having your own sectarian army, dealing drugs, trading in organs, kidnapping locals and foreigners, taking hostages, disrupting traffic at the airport, invading the capital, manufacturing captagon, etc etc. That is citizenship... !

yeah ofcourse not a single person of the people who got arrested by the army should be in jail. No one of the arrested people held a gun or shoot a single bullet in tebbene... there were robots and only jabal mohsen opened fire on these robots. Shame on such a country who doesn't put the ministers who feed these terrorists also in jail.

They are learning alot from hizballah's deployement in other sides of the farm where we call country thats y in tripoly the tension is always present .take down that flag till u learn what democracy is .