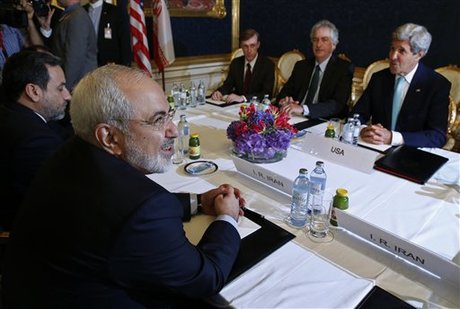 "I cannot say with certainty whether we will get a deal" by a July 20 deadline, German Foreign Minister Frank-Walter Steinmeier told reporters.

"It is now up to Iran to decide whether to take the path of cooperation with the international community. ... I hope that the days left until July 20 will be enough to create some reflection in Tehran," he said.

"The ball is Iran's court."

French Foreign Minister Laurent Fabius for his part said that talks between Iran and the five permanent members of the U.N. Security Council plus Germany would continue.

"We had deep discussions but we have still not reached a deal," Fabius told reporters before leaving Vienna, describing the negotiations as "useful."

For his part, British Foreign Secretary William Hague said that there had been no "decisive breakthrough" in the talks.

"We haven't made the decisive breakthrough ... There are very significant gaps, particularly on that issue (uranium enrichment). There is a huge gap (on that issue)," Hague told reporters.

Kerry was still in Vienna, however, and was due to hold talks later Sunday with Iranian Foreign Minister Mohammad Javad Zarif.

The talks are aimed at securing a historic deal that would kill off once and for all worries that Iran -- which denies any such aim -- might develop nuclear weapons under the guise of its civilian program.

The six powers want Iran to reduce dramatically the scope of its nuclear programs for a lengthy period of time and submit to tougher inspections from the U.N. atomic watchdog.

The Islamic republic in return wants a lifting of all U.N. and Western sanctions that have crippled its economy, in particular its vital oil sector.

The July 20 deadline can in theory be extended but only if both sides agree and the United States in particular is opposed to such a move unless Tehran offers major concessions first.

Meanwhile, China urged world powers and Iran "to show flexibility" in their talks, after officials from both sides said big gaps remained in negotiating positions.

"We urge all parties to show flexibility and political will to reach a comprehensive agreement," Chinese deputy foreign minister Li Baodong told reporters in Vienna.

Earlier on Sunday, both sides said big gaps remain in the talks.

"We have some very significant gaps," Kerry told reporters on arrival.

"On practically all the important issues differences persist and we have not been able to narrow them," one of Iran's top negotiators, Abbas Araqchi, told Al-Alam television.

And in a second tweet posted on his official Twitter account, he added: "I won't engage in blame games or spin. Not my style. What I will engage in is a sincere effort to come to an agreement. I expect the same" from the world powers.

Iran has always denied that it is pursuing a nuclear bomb. Zarif's comments seemed aimed at reiterating the Islamic republic's position that its atomic program is for peaceful energy purposes only.

His first tweet said: "We're able to make history by this time next Sunday. Trust is a two-way street. Concerns of all sides must be addressed to reach a deal."

The Western ministers were to use the opportunity to also discuss between themselves the deadly conflict escalating between Israel and the Palestinian group Hamas in Gaza. Calls for a ceasefire are mounting, but have so far been ignored by the warring sides.

Kerry, coming directly from Afghanistan where he brokered a breakthrough to end an election crisis there, will also seek to ease a major row over spying with Germany, which saw the CIA chief in Berlin expelled from the country.

Speaking about the Iran talks, Kerry said: "Obviously we have some very significant gaps. We need to see if we can make some progress."

He added that "it is vital to make certain that Iran is not going to develop a nuclear weapon, that their program is peaceful."

Fabius also underlined the big gaps remaining when he arrived.

"If we we can't there are two possibilities: one, we either extend, a so-called rollover; or we will have to say that unfortunately there is no perspective for a deal.

William Hague also underlined the "significant gaps" on his Twitter feed after arriving, and said talks were at "a critical stage."

He said a breakthrough in the talks between is "unlikely."

"There are very significant gaps, that is very clear in these negotiations. It is unlikely that there will be a quick breakthrough today," he said.

He added that Western foreign ministers were in Vienna "to see what the scope is for making progress before July 20," when a deadline expires for a deal to be reached.

Araqchi, in his interview with Al-Alam, said "differences have been narrowed" on "certain" other issues and "some solutions have been put forward" in the final-round negotiations which started on July 3.

But on the major divergences, "it is still not clear if we will get there," he said.

No deal for Iran and no sanction relief. The Iranian are a real threat to the region with their imperialism