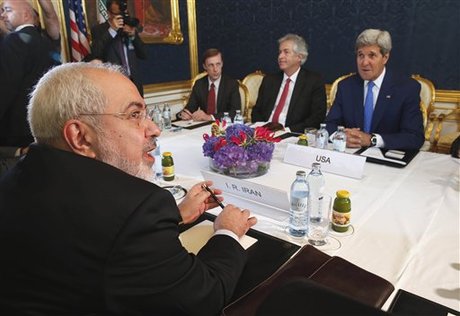 Iranian nuclear talks were hanging in the balance six days before a deadline to get a historic deal, after intensive talks on Monday described by U.S. Secretary of State John Kerry as "very tough".

"We are in the middle of talks about nuclear proliferation and reining in Iran's program, it is a really tough negotiation I will tell you," Kerry said during a second day of high-stakes discussions in Vienna.

He said later: "We are working, we are working very hard. Serious discussions. (It was a) good meeting."

Kerry was due to give a news conference on Tuesday morning, a U.S. official said, and it was unclear whether he would hold any more discussions with Zarif.

Egyptian state media reported that Kerry would leave Vienna on Tuesday to visit the country in an effort to broker a truce in Gaza.

The mooted nuclear accord would kill off for good fears that Iran might develop nuclear weapons under the guise of its civilian program after a decade of rising tensions and threats of war.

Iran denies seeking the atomic bomb and wants the lifting of crippling U.N. and Western sanctions.

The five permanent members of the U.N. Security Council plus Germany have been negotiating almost non-stop for months, after sealing an interim accord in November under which Iran froze its uranium enrichment in return for about $7 billion in sanctions relief.

But the talks to nail down a full treaty have met major sticking points, particularly on how much of Iran's nuclear program to dismantle.

Both sides are also under intense domestic pressure.

Zarif will have to come up with a deal that satisfies Iran's hardline Islamic leaders, while Kerry is under pressure from Congress ahead of November mid-term elections not to concede too much.

Kerry, along with the foreign ministers of France, Germany and Britain and the deputy foreign minister of China jetted into the Austrian capital on Sunday seeking to inject some momentum.

But the three European ministers left with no apparent breakthrough.

"It is now up to Iran to decide to take the path of cooperation... I hope that the days left will be enough to create some reflection in Tehran," Germany's Frank-Walter Steinmeier said before leaving Vienna.

"The ball is in Iran's court."

Britain's Foreign Secretary William Hague said it was "very important for Iran to be more realistic".

Hague said there had been no "decisive breakthrough" on Sunday and a "huge gap" remained on the key issue of uranium enrichment.

This activity can produce fuel for the country's sole nuclear plant or, if further enriched, the material for an atomic bomb.

The six powers want Iran to reduce dramatically the scope of its enrichment program, while Tehran wants to expand it.

Israel, the Middle East's sole if undeclared nuclear armed state and which together with Washington has refused to rule out military action, is opposed to any enrichment by Iran.

Israeli Prime Minister Benjamin Netanyahu warned Sunday that any deal leaving Iran with the capability to pursue enrichment activity would be "catastrophic".

Iranian negotiator Abbas Araqchi was Sunday publicly sticking by Iran's position on enrichment which he called "clear and rational".

"As the supreme guide said, the enrichment program has been planned with the real needs of the country in mind, meaning our need to ensure reactor fuel."

If no agreement is reached by next Sunday when the six-month interim accord runs out, all sides can agree to extend the talks for a further six months.

Washington however insists it will only consider such a move if Iran makes serious concessions first.

"We have a few days left and our efforts are to narrow the gaps and get an agreement by then," Michael Mann, spokesman for lead negotiator and EU foreign policy head Catherine Ashton, said Monday.

"We're still aiming for July 20. We still have some time."