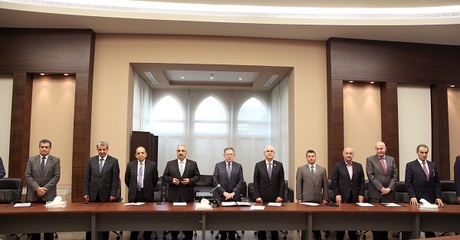 Al-Mustaqbal parliamentary bloc on Tuesday said it "categorically rejects" any use of Lebanese territory to fire rockets at Israel, describing the recent attacks as “a suspicious attempt to use Lebanese territory with the aim of implementing regional policies.”

Commenting on the deadly Israeli offensive against the Gaza Strip, the bloc described “the Palestinian people's battle to regain their usurped rights and land” as its “central battle and cause.”

But it “categorically” rejected any use of Lebanese territory to fire rockets at Israel, describing such activity as “a suspicious attempt to implementing regional policies that contradict with Lebanon's national interests.”

Since the Israeli assault began last week, four rocket attacks have targeted Israel from southern Lebanon, most of them from the al-Qlayleh plain near Tyre.

“The state's arms are the only arms entrusted with defending the Lebanese land in the face of the Israeli enemy,” Mustaqbal stressed.

Turning to the Lebanese-Syrian border, which is witnessing fierce clashes between Hizbullah and Syrian rebels, the bloc underlined that “protecting Lebanon's borders is the mission of the Lebanese Army and official Lebanese security forces.”

“The experiences that Lebanon is going through have proved that only the Lebanese state can protect its people … while militias and de facto forces, topped by Hizbullah, are behind the tensions, disasters and problems in the country,” Mustaqbal added.

It reiterated its call for Hizbullah to withdraw its fighters from Syria and “stop interfering in the Syrian affairs and the region's affairs.”

As for the controversial issue of legislation during presidential vacuum, the bloc again said it is willing to take part “in any legislative session dedicated to approving pressing issues, such as the State Budget, treasury bonds or the new wage scale.”

Mustaqbal also warned that “the current dangerous period in the country and the region requires a government that can work in an effective and harmonious manner, away from the policies of obstruction and paralysis.”

The cabinet, which had convened last Thursday, has not set a date for a new session due to a dispute over the issue of appointing deans and full-time professors at the Lebanese University.

+1000 texas, defacto likes to contradict himself, sounds like nasser qandilo and wiam wahabi...

You mean the Sunnis kkilling Arabs instead? Ha has defended its land on numerous occasions. Where r ur kings and so called Arab bros? In netanyahus bedroom I bet, getting it good