Berri on Presidential Deadlock: We Have Not Reached Age of Political Maturity 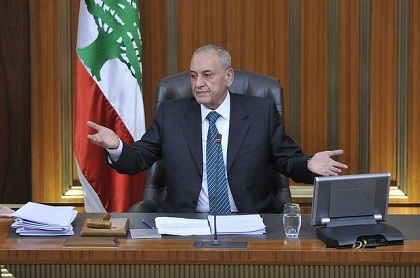 Speaker Nabih Berri lamented the failure of the Lebanese factions to elect a new president, warning that Lebanon will be faced with regional dangers if the powers continue to manage the country in the current manner, reported An Nahar daily on Wednesday.

He told the daily: “Unfortunately, we have not yet reached the age of political maturity.”

“The Lebanese powers are the main sides to blame, along with their reliance on foreign forces,” he added.

“Lebanon needs to be protect itself through restructuring the state” and seeking the needs of the people, stressed the speaker.

Moreover, he remarked that the country “would restore 90 percent of its immunity” if a president is elected “as soon as possible and before it is too late.”

The situation in Lebanon will become worse if the status quo remains, cautioned Berri.

“Every passing month exposes Lebanon to another vacuum, … which will endanger the parliamentary elections,” he stated, while renewing his rejection of extending its term for a second time.

Parliament's term was extended in May 2013.

“The solution lies in electing a president, bolstering constitutional institutions, and fulfilling all other national duties instead of becoming embroiled in wrongful policies,” Berri said.

“Through God's help, Lebanon has remained in better condition than regional countries that are threatened by fragmentation and division, which is what Lebanon experience for about 15 years” during the civil war, he remarked to An Nahar.

“Attempts to divide the country failed and its first and only guarantee are the people,” he stressed.

Several elections sessions have been held, but they were obstructed due to a lack of quorum caused by a boycott of the Loyalty to the Resistance and Change and Reform blocs of the March 8 alliance.

The boycott was prompted by the ongoing dispute with the March 14 camp over a presidential candidate.

Lebanese Forces leader Samir Geagea has announced his nomination, while Free Patriotic Movement chief MP Michel Aoun had repeatedly said that he will run in the elections if there is consensus over his candidacy.

Okay Nabeeh we get it, you made this happen now quit bragging!