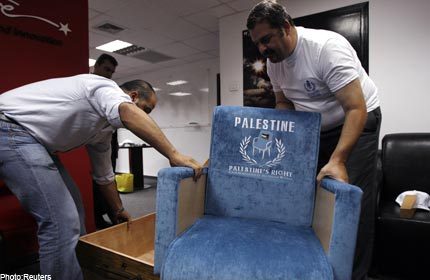 A hand-made olive-wood chair, fashioned to look like the blue seats at the United Nations, is set to tour Europe to raise support for a Palestinian bid to join the world body.

The chair was commissioned by a Palestinian NGO which is hoping to rally support for the campaign to secure full U.N. membership for a Palestinian state when the General Assembly meets in New York next month.

Made from Jerusalem olive wood and upholstered in crushed velvet in the U.N.'s trademark air force blue, the chair is embossed with the words: "Palestine's Right -- A full membership in the United Nations."

"The wood came from an olive tree in Jerusalem, the olive tree being a symbol of Palestine, while the blue upholstery with white writing came from Nablus," said Sufian al-Qawasmi, the Hebron-based designer who supervised the project.

The chair will begin its tour in Beirut and then head to Qatar, before moving to Europe where it will be taken to London, Paris, Brussels and Madrid.

It will then be flown to New York -- where it will be formally presented to U.N. chief Ban Ki-moon in the hope that it will serve as the official U.N. seat for the State of Palestine.

"We were focusing on the upcoming September bid and we had the idea of designing a chair that is an exact copy of regular U.N. chairs," said Mohammed Sabih, a businessman and activist with "Palestine Deserves," the NGO behind the campaign.

Samir al-Baz, another businessman who is involved in the initiative, said the chair will first head to Lebanon "because it has 400,000 Palestinian refugees living there, and also because it will head the Security Council next month."

All applications for membership must go through the Security Council -- and next month Lebanon, which is one of the 10 non-permanent council members, will become temporary president of the body.

"Then we will go to Qatar which will preside over the General Assembly in September, then to Paris, London and Brussels, where the EU parliament is based, then to Madrid where the peace talks began" in 1991, Baz said.

"The last stop is New York."

The campaign is being funded by private sector businessmen and women, six of whom will accompany the chair on its grand tour which is due to kick off on September 4.

The Palestinians are to formally submit their request for membership on September 20 when world leaders begin gathering in New York for the 66th session of the General Assembly.

The decision comes after direct peace talks with Israel ran aground late last year in an intractable dispute over Jewish settlement construction on occupied Palestinian land.

Israel implacably opposes such a statehood move, saying negotiations are the only way to resolve the conflict and establish a Palestinian state, in a position backed by the United States.