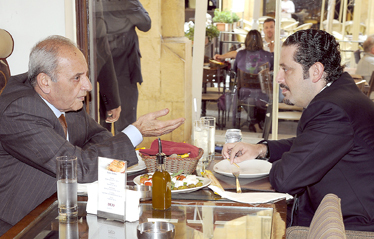 Consultations are ongoing between the AMAL and al-Mustaqbal movements in an attempt to reach consensus over several controversial crises impeding parliament and cabinet sessions.

According to An Nahar newspaper published on Friday, a meeting was held between Finance Minister Ali Hassan Khalil, who is Speaker Nabih Berri's adviser, and the head of former premier Saad Hariri's office, Nader Hariri, on Thursday evening.

The meeting was reportedly held in presence of Health Minister Wael Abou Faour, who is the aide of Progressive Socialist Party chief Walid Jumblat, at the finance ministry headquarters.

The daily said that the three officials discussed ways to resolve the ongoing rift over several controversial issues, including a spending decree that is threatening to delay the salaries of public employees.

Minister Khalil expressed fear recently that civil servants would not be paid their salaries at the end of the month because of the paralysis of parliament.

However, al-Mustaqbal movement, which is affiliated in the March 14 alliance, is insisting that the only solution to the spending row is for Khalil to submit the state's 2014 budget draft-law to the parliament.

they are eating at a fancy restaurant when the majority of Lebanese are hungry and in despair, its not their fault, its the people's

No hope and no future! Ha, pretty good FT