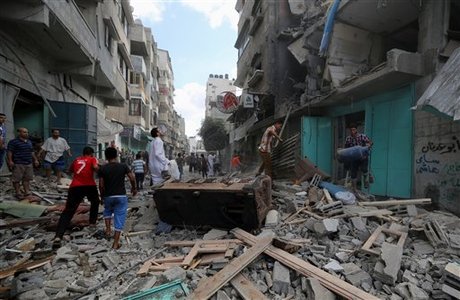 Loyalty to Resistance bloc MP Ali Fayyad on Friday discussed with United Nations Special Coordinator for Lebanon Derek Plumbly the ongoing Israeli war on the Gaza Strip and its repercussions on the region's stability.

"Fayyad expressed concern over the repercussions of the Israeli massacres and violence in Gaza,” the state-run National News Agency reported.

The Hizbullah MP also underscored the war's influence on stability in the region, said the NNA.

The same source noted that the discussion tackled as well the situation in Lebanon.

The talks were held in Fayyad's office at the parliament.

More than 270 people have been killed so far in 11 days of Israeli violence on the Gaza Strip.

The war has affected security in southern Lebanon in the past days as several rocket attacks were fired from a region near the city of Tyre towards northern Israel.

Three men were arrested in the light of these events, one of them turned out to be affiliated with the Jamaa Islamiyya, while the two others were identified as Palestinian nationals.

Accordingly, the Lebanese army has ruled out Hizbullah involvement in the firing of rockets.

so Hezbollah do talk to Derek Plumbly? the rep of the UN which is controlled by the great satan?

do you still enjoy music and support HA?

They kill more Muslims in Iraq and Syria in an hour then Israelis in 10 days of Gaza fighting. The Israelis must be a real incompetent killers, if this is their real goal! They have a lot to learn from Hez, Hamas, Iran, Assad,etc in that regard,

and u must be so takfiri to call them non muslim ya jaheel...

Ya KEZB ! You know what would leave us out of a new confrontation with Israel ? Your lack of weapons. It will most certainly leave us out of terrorist attacks by the Free Shiite Brigade... i mean Sunni... or is it Alawite ?

Pack your bags and go home ! Wherever that is because you are fighting for everything other than Lebanon !

Hezbollah lecturing the pathetic UN on how war is destabilizing the region. You can't make that up.

You must be joking! This terrorist hizb is allied with Israel.