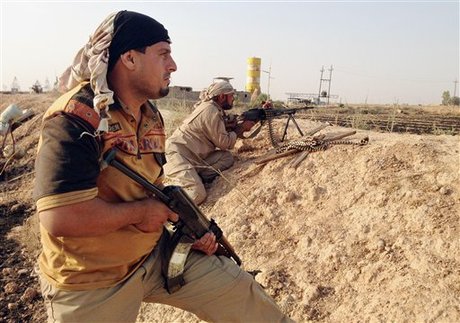 Fighters from the jihadist-led coalition that controls large parts of Iraq launched a brazen raid on an Iraqi air base near Saddam Hussein's hometown of Tikrit, military sources said Friday.

The army and an Islamic State statement differed on the outcome of the battle and the death toll, but a military intelligence officer admitted the air field known as Speicher was stormed late Thursday.

"Last night, gunmen infiltrated the base. There were snipers and suicide bombers among them, they managed to reach the runway," the officer, who witnessed the attack, told Agence France Presse on condition of anonymity.

IS fighters and their allies control the nearby city of Tikrit but Iraqi federal forces had managed to hold on to Speicher -- named by U.S. troops after a navy pilot whose plane was shot down by Saddam's forces in 1991 -- despite repeated attacks in recent weeks.

"When the clashes erupted, the pilots flew the base's aircraft out" to save them from destruction, the officer said. "But one Russian-made helicopter which had not taken off was destroyed."

He said a unit of special forces soon arrived, sparking a bloody battle.

"When it was over, I counted 35 dead attackers inside the base. We had at least three special forces killed and four wounded."

In a statement posted on Internet sites close to the Islamic State, the jihadist group said it had killed many pilots and soldiers during its raid on Speicher, which lies a few kilometers (miles) north of Tikrit.

It said it shot down two helicopters in the air, disabled or burned several aircraft on the ground, destroyed army vehicles, fuel reserves and communications equipment.

The intelligence officer, however, said that Speicher's fleet had managed to take off and that, on their way out, one or several aircraft attacked another IS convoy they spotted heading towards the base to join the battle.

He was not able to provide a casualty toll for the air raid.

Another army officer based in the area also said that IS fighters had stormed Speicher but did not specify how many combatants had died.

Down with Malki and his sectarian regime.