Protest at Greek NATO Base over Destruction of Syrian Chemicals 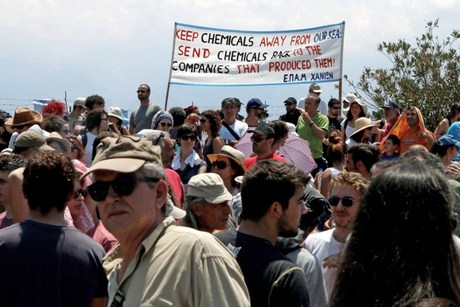 Hundreds of campaigners closed a road to a NATO naval base in Greece on Saturday, protesting against the destruction of Syrian chemical weapons in the region.

The blockade -- which is due to last for three days -- has seen around 250 protesters gather at the Souda base, near Chania in western Crete.

Hundreds of metric tonnes of chemical agents were handed over by Syria as part of an international agreement to avoid Western air strikes after a chemical attack in the country caused international outrage.

A U.S. naval ship fitted with hydrolysis equipment, which helps break down the lethal chemicals into a sludge, started the job of "neutralizing" the arsenal in international waters earlier this week.

Although the byproducts of the process will be disposed of on land in Finland and Germany, protesters in Greece object to the work being done at sea, and have prevented service vehicles reaching the Souda base in response.

"Just imagine what a leak of chemicals could mean for the Mediterranean Sea," Pavlos Pollakis, the mayor of the region of Sfakia, told the Athens News Agency.

Campaigners opposed to the disposal have been distributing leaflets to people in the area, while in a separate protest fishermen from the Cretan city of Chania are also planning a protest at sea.

"Even if the hydrolysis is successful, the region is in danger of becoming the dump of the Mediterranean. The chemical weapons of the world will be brought here and the danger of an accident will be bigger," said Yiannis Malandrakis, the mayor of the coastal village of Platanias.

The Pentagon said on July 7 that crew on the MV Cape Ray had begun work to "neutralize" some 600 metric tonnes of weapons at an undisclosed location in the Mediterranean, an unprecedented operation expected to take about two months.

U.S. officials have insisted the operation will not pose a serious risk to the environment and that elaborate precautions have been undertaken, but the U.N.-backed operation has prompted protests in Italy as well as Greece.

NGOs and environmental groups have questioned the safety of the operation and the lack of information being provided to nearby coastal communities.

Syria handed over sulfur mustard and a precursor to make Sarin gas under the terms of a U.N.-backed and U.S.-Russia brokered agreement to head off Western air strikes against the regime last year.