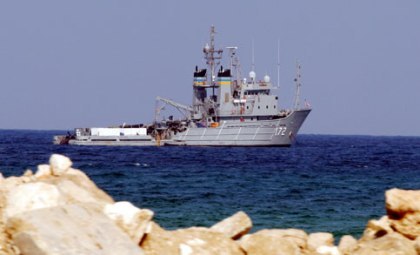 Iran has dispatched a submarine and a warship to the Red Sea on a patrol mission, navy commander Admiral Habibollah Sayyari said in a report by state media on Tuesday.

"This flotilla which is comprised of a submarine and a warship will patrol the high seas and display the capabilities of the Islamic Republic of Iran," said Sayyari, quoted by the state television website.

Soon after Sayyari's declaration, the Israeli military said it had deployed two missile boats to the Red Sea.

"The navy has deployed two missile boats to the Red Sea as part of a routine exercise," a military spokeswoman told AFP, refusing to link the move with Iran's deployment.

In July, Iran announced intentions to boost its military presence in international waters, with plans to deploy warships to the Atlantic.

Sayyari said that the flotilla, the 15th mission of its kind to be dispatched to the Red Sea, would also focus on "fighting piracy".

In recent years, Iranian media have reported that both Iranian vessels and those of other nations have received Iranian naval escorts through the pirate-infested waters off Somalia.

In June, Iranian "Kilo" class submarines escorted warships to the Red Sea "to collect data," in their first mission in distant waters.

Iran's maritime forces consist mainly of small units equipped with missiles and operating under the control of the elite Revolutionary Guards in the Gulf.

Its ocean-going fleet is small, under the command of the navy and consists of half a dozen frigates and destroyers from 1,500 to 2,000 tons, along with three 3,000-tonne submarines bought from Russia in the 1990s.

In February, Iran moved two warships into the Mediterranean, crossing the Red Sea and the Suez Canal, triggering the anger of Israel and prompting the Jewish state to put its navy on alert.

These Iranian floating tin cans would make for great Target Practice!! This obvious provocation attempt by the Iranian regime is based on a firm belief that no one will intercept these outdated tin ships which are most likely carrying outdated weapons and zombie terrorists (the most lucraitve export and the pride and joy of the Iranian 7th century regime) to their protege the Assad family Regime and to Hezb Ebola (through Syria), to help them murder more civilians (hence implicating themselves (Syrian regime and Hezb Ebola) further) and stoke instability in the entire Middle East and the world.

I really hope this Titus kid is Israeli. If Lebanese or Arab, its a sad situation (for the Arabs/Lebanese! Self respect anyone? How can anyone respect the Arab's when they show so little respect for themselves? They would chose to be friends with a colonialist power that has directly destroyed their country several times over those who have help liberate their land. Its amazingly amusing to read this and think it was written by an Arab.

On the other hand, being an American, its nice to know that we have such simple slaves in the Arab world. So amazingly self hating that they'll do anything we tell them to do. Boy, the Arab's have a long way to go.

There's no such thing as 'Arab' identity. I Like Titus, thumb up!

To: Brad Svenington, As an Israel let me ask you, don't you wonder why Israel entered Lebanon several times? was it for destroying the state as we love destruction or was it Lebanon who became a Scorpion nest and shelter to terror groups acted against Israel ? The States attacked Iraq and Afganistan thousands of miles away while Israel is not allowed to defend it inhabitants from terrorists?
As you can notice, the Arabs don't need Israeli interference to be killed they do it with greater success hating each other.
As an Israeli w'e'll be happy if our region will be calm and peaceful but its only a dream.

"Brad" or Hassin, no amount of "Taqiyyah" will save your criminal rat master in the hole or his criminal masters in Damascus and Tehran I'm afraid. Just ask your criminal "saint" Mustafa Badreddine or shall I say "Elias Saab" as his masters wanted him to be while he was in Kuweit sabotaging the oil installations there before escaping to Iran and then back to Lebanon to kill Hariri and all the others....

Yo Brad or whatever your fake Sweedishish kind of name wannabe,your vocabulary gives it away, in noway, form or shape you could be american you are just an imposter who was indoctrinated in some Red Army type old fashion school who has no idea what politically correct communication is about. it is sad that people would call themdselves American and use words like colonialism and slaves and other crap of the sort. so shove it or come clean..