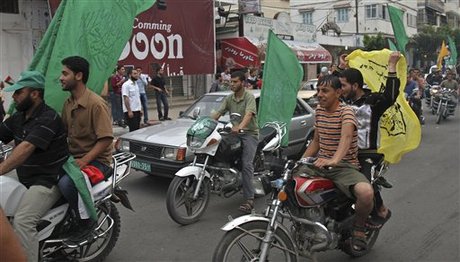 The Palestinian campaign to secure full U.N. membership presents a greater threat to Israel than that posed by Hamas, the Israeli finance minister said on Wednesday.

"This Palestinian initiative represents a more serious threat than that posed by Hamas," Yuval Steinitz told Israel's public radio, referring to Gaza's Islamist rulers whose founding charter calls for the destruction of the Jewish state.

If the Palestinians made good on their plans to seek United Nations membership, Israel would "respond," he promised.

Although Steinitz did not spell out exactly how Israel would retaliate, his remarks were made shortly after Haaretz newspaper published a report saying the minister had blocked the payment of 380 million shekels ($106 million, 73 million euros) in tax revenues to the Palestinian Authority.

Officials in the West Bank city of Ramallah were not immediately available to comment on the report.

The minister, who belongs to the ruling Likud party of Prime Minister Benjamin Netanyahu, said he believed it would be impossible to stop the bid which is to take place when the U.N. General Assembly meets in New York next month.

Infrastructure Minister Uzi Landau, who was also interviewed on public radio, said that if the Palestinian went ahead with their bid it would signal the end of all agreements signed with Israel.

"In this case, it is clear that our agreements with the Palestinians would be null and void," said Landau, who belongs to the ultra-nationalist Yisrael Beitenu party.

"We should then impose our sovereignty on territories over which there is consensus -- that is, in the Jordan Valley and the major settlement blocs, and even more," he said, reiterating a proposal raised by right-wing elements that Israel annex Palestinian land in response to the U.N. bid.

The Palestinians are to formally submit their request for membership on September 20 when world leaders begin gathering in New York for the 66th session of the General Assembly.

The decision comes after direct peace talks with Israel ran aground late last year in an intractable dispute over Jewish settlement construction on occupied Palestinian land.

Israel implacably opposes such a statehood move, saying negotiations are the only way to resolve the conflict and establish a Palestinian state, in a position backed by the United States.

"If the Palestinians made good on their plans to seek United Nations membership, Israel would "respond," he promised." ...... This is a joke, not the funny type! Israel would respond if the Palestinians try and get recognition to a country which is a fraction of what Israel STOLE from them? where are the Arabs?!? where is the Arab league? The world gets ruffled up when the Iranian monkey says he will bring the end of Israel but not when Israel comes out with statements like this.... How can the world not expect the Palestinians not to resort to arms and suicide when you read stuff like that. I'm not even Palestinian and this drives me crazy

The Bill will pass.
What is happening is purely a Public Affair Propaganda by Israel.
This would revive the Jewish emotion and western weak attention to favor Israel.....

This will fail as Palestinians entity has a right to a nation.

While the Arabs are in dormant stage , Israel is trying to win world attention through fear.