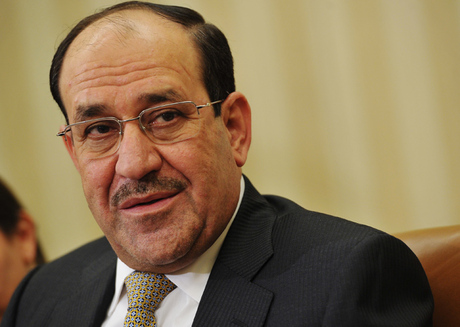 Maliki, a Shiite, has had a troubled relationship with Iraq's Sunni tribes, who in 2006 began helping the government fight al-Qaida-linked Sunni militants, but who now accuse him of sectarian discrimination.

The Iraqi premier's fresh overtures to tribal chiefs comes amid an onslaught spearheaded by Islamic State Sunni militants that has taken swathes of the country in recent weeks.

"He stressed that the tribe was and still is the foundation for protecting the security of areas against the dangers that threaten them, particularly terrorists," a statement from Maliki's office said.

"Prime Minister Nuri al-Maliki added that the government would provide the tribes with everything they need to defend their areas."

From late 2006, when Iraq's bloody sectarian war was around its peak, some Sunni tribes began siding with U.S. forces against the often brutal tactics of their al-Qaida-linked coreligionists.

The American military started paying the militiamen regular salaries, and called them the "Sons of Iraq". In Arabic, they were referred to as the Sahwa, or "Awakening", forces, and numbered around 100,000 at their peak.

The move was seen as crucial to the decline of violence in Iraq from 2008 onwards and helped provide jobs for the country's Sunni minority, dampening resentment against the Shiite-led government.

But since U.S. forces handed over responsibility for the Sahwa to Iraqi authorities, the militiamen have alleged poor treatment, delayed payment and a failure of the Shiite-led government to follow through on a promise to incorporate them into the civil service and conventional security forces.

Maliki's office said he had met tribal chiefs from Sunni strongholds in the Anbar, Salaheddin, Nineveh and Kirkuk provinces, and that they had asked for a "bigger role in countering the terrorists, and for help with weapons and training."

Maliki agreed to form committees to meet their requests, his office said.

May be a fake account and I have never seen FT using this language against Sunnis. I however seen you referring to Sunnis as cancer. Nonetheless, having the state representative of all major components of the state (including Sunnis) and the removal of the nonsensical de-Baathification policy that disenfranchised hundreds of thousands of people (if not millions) is a must toward building a better Iraq.