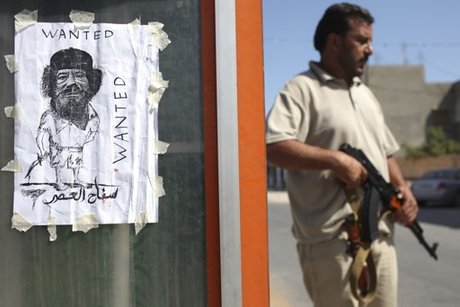 Algeria never envisaged granting asylum to Moamer Kadhafi, its foreign minister told French radio on Thursday, Algeria said Thursday it is ready to recognize Libya's former rebels when they form a broad-based government and insisted it had not offered an escape route to ousted strongman Moammar Gadhafi.

Algeria's Foreign Minister Mourad Medelci told Europe 1 radio that Libya's National Transitional Council had vowed to set-up a "government representative of all regions" and added: "When it has done so, we'll recognize it."

Algeria angered Libya's new former rebel government on Saturday by allowing one of Gadhafi's wives and some of his children and grandchildren to cross the border and seek sanctuary from the manhunt targeting the ousted strongman.

This fed into a suspicion the NTC leadership already felt for its larger neighbor, based on reports that Algeria had supported Gadhafi's bid to cling to power with arms supplies and might now grant him protective asylum.

But Medelci dismissed this, adding that he had spoken by telephone to NTC number two Mahmud Jibril and planned to hold talks later Tuesday in Paris with the movement's president, de facto Libyan leader Mustafa Abdel Jalil.

"The hypothesis that Mr. Gadhafi could come knocking on our door was never considered," said Medelci, a few hours before he was to attend a conference in Paris of countries France has dubbed "friends of Libya".

France, which has mobilized international support for the CNT, is glad Algeria has agreed to attend the talks, but Foreign Minister Alain Juppe expressed regret the country had yet to recognize the new regime.

"Algeria has had an ambiguous attitude throughout this affair, that's the least you can say," he told RTL radio, adding that he had spoken to Algeria's President Abdelaziz Bouteflika.

"He assured me he had never sent anything other than humanitarian aid. I hope that checks out," he said.

Algeria, a former French colony, shares with Gadhafi a distrust of Western interference in North Africa and is concerned that the rebels that overthrew him include Islamists sympathetic to militants within its own borders.

According to the Algerian daily el-Watan's online edition on Wednesday, Gadhafi has tried to negotiate with Algerian authorities to enter the country from a Libyan border town where he is holed up after the NTC seized Tripoli.

Citing sources close to the Algerian president, the francophone newspaper reported that the former strongman has "tried to reach President Abdelaziz Bouteflika by telephone but he has refused to take the call."

The report said Gadhafi was hiding out in the border town of Ghadames with family members, awaiting permission to cross into Algeria where his wife, two sons and a daughter have already made their way.

According to an Algerian government source, at least 500 Libyan Tuaregs have fled into Algeria in recent days, accused of supporting Gadhafi's rule and now on the run from NTC rebel forces.

Gadhafi's forces are known to have recruited Tuaregs, a semi-nomadic people, from across North Africa, and refugees and former mercenaries, some still armed, have been seen returning to Mali as well.

Gadhafi's daughter Aisha gave birth to a daughter in Algeria after fleeing Libya as her father's regime crumbled.

The Algerian government said Tuesday that she had crossed into Algeria on Saturday with her brother Hannibal, their mother Safiya -- Gadhafi's second wife -- and the fugitive leader's eldest son Mohammed.

However Seif al-Islam, another fugitive son of the toppled dictator, said Wednesday in an audio tape broadcast on an Arabic-language channel that he was still in Tripoli and that the fight against rebels goes on.