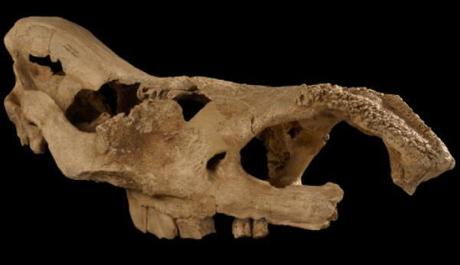 A 3.6-million-year-old woolly rhinoceros fossil discovered in Tibet indicates that some giant mammoths, sloths and saber-tooth cats may have evolved in highlands before the Ice Age, experts say.

Paleontologists from the Natural History Museum of Los Angeles County and the Chinese Academy of Sciences, who found the rhino's complete skull and lower jaw in 2007, argue that it adapted to the global cooling before it happened.

In a paper to be published Friday in the journal "Science," they will argue that the rhinos evolved in the cold and snowy Tibetan highlands while the rest of the world was much warmer.

The animal developed special adaptations -- including a flat horn useful for sweeping snow away to find vegetation -- and then was able to spread to northern Asia and Europe once the Ice Age set in 2.6 million years ago.

"The extinction of Ice Age giants such as woolly mammoths and rhinos, giant sloths, and saber-tooth cats has been widely studied, but much less is known about where these giants came from," the researchers said in a statement.

"The Tibetan Plateau may have been another cradle of the Ice Age giants."

In addition to the woolly rhino, the team also uncovered extinct species of three-toed horse, Tibetan bharal -- also known as blue sheep -- and some 25 other kinds of mammals.

"Cold places, such as Tibet, Arctic, and Antarctic, are where the most unexpected discoveries will be made in the future," said Xiaoming Wang, from the Natural History Museum of Los Angeles County.

"These are the remaining frontiers that are still largely unexplored."