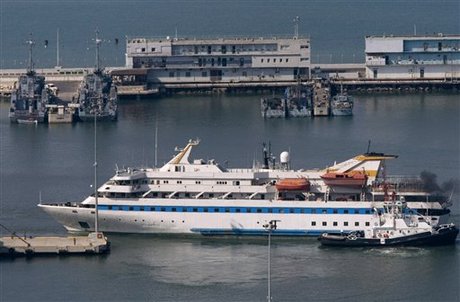 Turkey expelled the Israeli ambassador to Ankara on Friday and suspended all military ties with its one-time ally after a U.N. report condemned excessive force used by Israel on a Gaza aid flotilla.

"At this point the measures we are taking are: The relations between Turkey and Israel will be downgraded to second secretary level. All officials over the level of second secretary, primarily the ambassador, will turn back to their country at the latest on Wednesday," Foreign Minister Ahmet Davutoglu said at a press conference.

Davutoglu counted five measures against Israel as a protest for its failure to fulfill Turkey's demands to overcome the crisis erupted after Israeli commandoes stormed the flagship of the aid flotilla and killed nine Turks.

"Second, all the military agreements between Israel and Turkey are suspended," he said.

"Third, as the country with the longest coastline on the Mediterranean, Turkey will take every precaution it considers necessary for the safety of maritime navigation to East Mediterranean," he said.

Davutoglu said Turkey did not recognize Israel's right to blockade Gaza and intended to take its protest to The International Court of Justice in The Hague.

"For this aim, we are starting initiatives at U.N. Security Council," he added.

However, Israel was mulling Friday its response to Turkey's decision.

no one cares for zionists anymore. only few treasonous lady geagea supporters

Turkey is to be applauded. LOUDLY!!! Finally someone has the b*lls to put Israel in its rightful place... Hope that inspires others...

Biddig, since when does Turks considered to be Arabs?
If you tell a Turk that he is an Arab he will be insulted.
Just to remind you Arabs what did you do the Turks in WW1.
However as now Turks are acting like Arabs its their shame.

Biddig, since when does Turks considered to be Arabs?
If you tell a Turk that he is an Arab he will be insulted.
Just to remind you Arabs what did you do the Turks in WW1.
However as now Turks are acting like Arabs its their shame.

Doesn't Turkey know that the most criminal state since Hitler's Germany that never gets punished for its crimes but instead is protected and encouraged by the United States of Affkoles to continue on the same path will never apologize to anybody for anything? Not only that, the criminal state also is a blood sucker of US taxpayers who dare not say a word or complain. The most oppressed of all people turn out to be the most criminal and oppressive of all people. What filth.

danny it's called sarcasm look it up

at least the Turks did and are doing something about it, unlike their neighbors in Syria who refused to give the flotillas a safe harbor but gave the Israelis for almost forty years one of the safest borders, the Israeli felt so safe they built a vacation ski resort.

Bigdig:
I appreciate your irony. We "got it"

Turkey is the Arab Trojan Horse. They do these things to get sympathy from the dumb arab street, meanwhile they are attacking syria and other movements that oppose israel.

And the arabs are dumb enough to believe this.