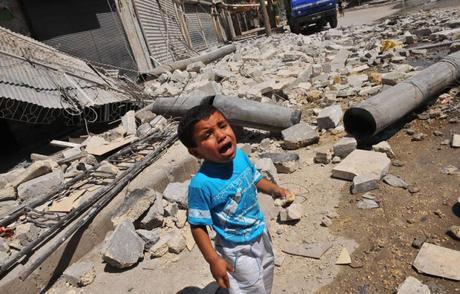 Syrian rebels on Saturday were defending Marea, one of their main strongholds in the north, against a rapid advance by Islamic State jihadists, a monitoring group and an activist said.

The opposition Syrian National Council in exile called for the international community to attack IS positions not only in northern Iraq but also in Syria.

IS fighters were nearing the towns of Marea and Aazaz, both bastions of rebel groups battling Syrian President Bashar Assad's regime, after seizing a number of villages in Aleppo province bordering Turkey in just three days.

If the jihadists manage to take the strategic towns, this could deal a severe blow to rebel groups battling both regime forces and the IS.

"There is fierce fighting on Saturday between rebels and the IS around Marea," the Syrian Observatory for Human Rights said in a statement.

Marea is the main base of the coalition Islamic Front, the most important rebel grouping that is fighting both Assad's troops and the jihadists.

Abu Omar said the jihadist group, which is also currently being targeted by U.S. air strikes in northern Iraq, is using heavy weaponry it seized when it routed the Iraqi army during a lightning offensive there in June.

The arms were supplied to the Iraqi armed forces by the United States, experts say.

"They're using their tanks and artillery to attack towns and villages" in Syria, Abu Omar added.

Syria's opposition in exile late Friday warned that the danger posed by IS jihadists in Iraq and Syria was "indivisible".

"If the international community is serious in fighting against it (IS), such fighting must not be limited to Syria," it said in a statement.

The clashes near Marea comes after IS fighters took around 10 villages in northern Aleppo on Wednesday and Thursday, the Britain-based Observatory said.

Aazaz, next to the border crossing with Turkey, would be a valuable asset to IS as it seeks to expand its self-declared "caliphate" in the territory it holds in Syria and neighboring Iraq.

IS emerged from al-Qaida's one-time branch in Iraq, and initially fought alongside Syria's opposition, including more moderate rebels and Al-Nusra Front fighters.

In addition to the jihadist offensive, rebels in Syria also face an advance by Assad's forces on the northern edge and northeast of the city of Aleppo, the Observatory said.

"On Friday night, the army and pro-regime militias launched a fierce assault that continued until dawn on the outskirts of Handarat as well as the strategic Kindi hill," it said.

Taking Kindi would enable government forces to overlook eastern districts of Aleppo held by rebels since 2012, and since bombarded daily by regime warplanes at a cost of hundreds of lives.

More than 170,000 people have been killed in Syria since the beginning of its conflict in March 2011, according to the Observatory.

why did bashar assad let the jihadis out of jail, so they fight the rebel for him

They call the rebels terrorists. And when these rebels fight IS with everything they got? Silence.