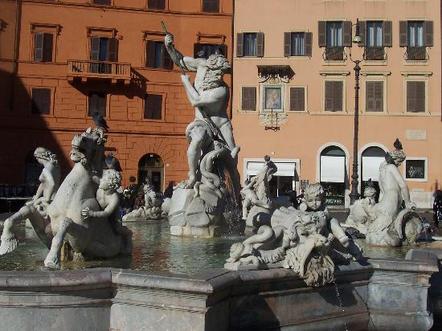 Italian authorities have arrested a 52-year-old man suspected of vandalizing one of the fountains in Rome's landmark Piazza Navona.

The suspect, who comes from Rome, was apprehended in the city center overnight after police recognized him by his distinctive shoes, said the sources.

CCTV footage had captured an overweight middle-aged vandal using a rock to break off marble chunks of the Moor Fountain in the early hours of Saturday.

Work was due to begin on Monday to repair the damage, estimated at 10,000 Euros ($14,000). The chunks of marble broken off by the vandal have been recovered and may be re-attachable, according to Umberto Broccoli, the Rome municipality's cultural heritage chief.

In a basin of pink marble on the south end of the square, the fountain holds statues of a Moor battling with a dolphin, surrounded by four Tritons.

Investigators said he was in a confused state when arrested in central Rome. "I wanted to draw attention to personal problems I've had with the magistrature," he was quoted as saying.

Rome Mayor Gianni Alemanno congratulated the police for identifying and arresting the man and said he hoped he would be given "exemplary punishment".

A tourist favorite, the fountain was designed by Giocomo della Porta in 1575.

The statue of the Moor, by Renaissance master Bernini, was added in 1653.

The original statues were removed, during restoration work in 1874, to the Villa Borghese and replaced with copies.