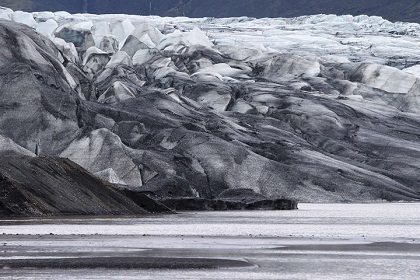 Iceland has warned that its largest volcano is in danger of erupting, four years after millions of air travelers were grounded by a huge ash cloud from another peak.

Scientists believe the ash from an eruption at Bardarbunga could disrupt transatlantic and northern European air traffic, with floods of melting ice likely to cause serious damage to the country's infrastructure.

The Icelandic Meteorological Office raised its aviation alert to the second-highest level on Monday after four days of increasing seismic activity, signaling a heightened risk of eruption.

The alert was raised to "orange" after seismologists recorded an earthquake of 4.5 on the Richter scale early on Monday, the strongest in the region since 1996.

Roads in a sparsely populated area north of Bardarbunga were closed on Tuesday, as the Meteorological Office said it had recorded some 2,600 tremors over the past four days.

Bardarbunga, Iceland's second-highest peak, rises to more than 2,000 meters (6,500 feet), caps the country's largest volcanic system. It sits under the vast Vatnajokull glacier, the country's largest, in the southeast of the island, one of the most active seismic areas on the planet.

Bryndis Brandsdottir, a geophysicist at the University of Iceland, told public broadcaster Ruv on Tuesday that the latest readings indicated that magma was not approaching the surface, but rather remaining "three to seven kilometers below".

"We meet twice a day, but the earthquake activity still comes in waves. There do not seem to be any changes, but it is still very powerful," Vidir Reynisson, department manager at Iceland's Civil Protection Department, told broadcaster 365.

In 2010, the Eyjafjoell volcano under the Eyjafjallajokull glacier, further to the south, shot a massive plume of volcanic debris up to nine kilometers (six miles) into the sky, blowing ash across to mainland Europe.

The ash cloud caused the planet's biggest airspace shutdown since World War II, with fears it could damage aircraft engines.

In 2011, Iceland's most active sub-glacial volcano Grimsvotn erupted, forcing Iceland to temporarily shut its airspace amid fears of a repeat of the Eyjafjoell flight chaos.