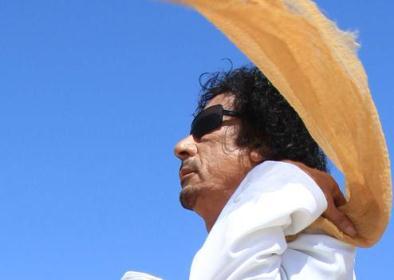 A large convoy of civilian and military vehicles from Libya crossed into Niger but officials denied Tuesday that Libya's toppled leader Moammar Gadhafi was aboard.

The convoy entered the Sahelian country late Monday and drove through the city of Agadez, a stronghold of the former Tuareg rebellion Gadhafi once supported, a local military source said on condition of anonymity.

"I saw an exceptionally large and rare convoy of several dozen vehicles enter Agadez from Arlit ... and go towards Niamey," he said. "There are persistent rumors that Gadhafi or one of his sons are traveling in the convoy".

The new Libyan leadership in Tripoli simply said it knew of a convoy crossing into Niger.

"We can confirm that around 200 cars crossed from Libya to Niger, but we can't confirm who was in this convoy," Jalal al-Gallal, spokesman for the National Transitional Council (NTC), told Agence France Presse.

"These types of convoys usually carry Gadhafi or one of his sons," he added.

The nearest border to Arlit, a mining town north of Agadez, is with Algeria, where Gadhafi’s wife, daughter and two of his sons found refuge last week.

Speaking from Algeria, Niger Foreign Minister Mohammed Bazoum denied however that Libya's fugitive former strongman was in the convoy.

"It is not true, it is not Gadhafi and I do not think the convoy was of the size attributed to it," he told AFP by phone.

"The truth is that several people, of varying importance, arrived in Niger. That's it, there are no high-profile figures, certainly not Gadhafi himself nor any of his sons," Bazoum said.

He said the only officials in the convoy were Libyan TV executives.

When asked whether Gadhafi was welcome in Niger, the minister said that decision was the presidency's but added: "Gadhafi in Niger could cause some problems."

Neighboring Burkina Faso, another regime with close ties to Gadhafi which has not ruled out offering him shelter, was elusive when addressing reports that the convoy was heading to Ouagadougou.

"We have no such information at the moment. Obviously, if they cross our border, we will find out ... We are simply going to monitor the situation throughout the day," a government official said.

France, which has been spearheading NATO operations to help rebels get rid of Gadhafi, also said it had no reason to believe that the fallen strongman was in the convoy.

On Monday, a Nigerien government official said another, smaller convoy of 11 high-profile Libyans had arrived in Niger.

"Moammar Gadhafi was not part of the delegation that arrived in Niger, which consisted of three Nigeriens: Agaly Alambo and two of his brothers and 11 Libyans, among them Mansour Daw," the government source said.

Daw was Gadhafi’s feared head of internal security and Alambo a historical leader in Niger's Tuareg rebellion with close ties to Gadhafi.

When Western powers backed Libya's own rebel movement earlier this year, Alambo recruited hundreds of former rebels from Niger to fight alongside Gadhafi, whom many Tuaregs across the region see as their champion.

Last week, a Tuareg source said that people close to Gadhafi had arrived in Agadez in April with suitcases full of money to recruit "hundreds" of young people.

The source said about 1,500 Tuareg ex-rebels had fought for Gadhafi.

But since the fall of Tripoli to fighters loyal to Libya's National Transitional Council, hundreds of Tuareg fighters have returned to Niger, while about 500 withdrew to Sirte, Gadhafi’s hometown.

Niger last month formally recognized the NTC as its neighbor’s only legal authority and urged the new leaders to safeguard the security of foreigners living in Libya.

Niger's President Mahamadou Issoufou, elected in March, was considered an ally of Gadhafi and the two last met in Tripoli in February.

Tuaregs are also present in neighboring Mali and Burkina Faso, whose regimes have over the years been among the main west African beneficiaries of Gadhafi’s largesse.