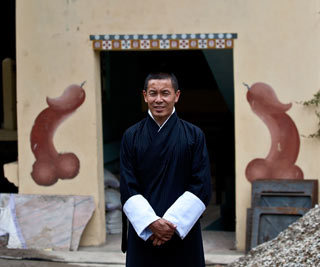 In the insular Himalayan kingdom of Bhutan, the phallus is an ancient symbol commonly painted on houses to ward off evil spirits, but it is increasingly rare in the modernizing national capital.

The demise of this traditional motif, still seen all over in rural areas, points to profound changes underway in a country that has gone to extraordinary lengths to shield its unique local culture from outside influence.

The first foreign tourists arrived as recently as 1974 and television was banned until 1999 out of fear of the impact of Western values on a nation that has never been colonized, despite its vulnerable position between India and China.

On the outskirts of Thimphu, Tshewang Nidup is proud to have two meter-high (three-foot) penises painted either side of the front door of his home next to a river that runs through the sleepy capital.

"The penis as a symbol became important because we believe that if you have the phallus then evil will be warned off," explained the 46-year-old father of six, whose young family wander around oblivious to the graphic imagery.

The history of the phallus in Bhutanese culture stems from a mythical figure called Drukpa Kunley, known as the "Divine Madman", who is said to have roamed the country seducing women and fighting evil during the 15th and 16th centuries.

The Tibetan holy man, warmly adopted as a national saint by the Bhutanese, is said to have used his member to perform all manner of tricks, including flying and spewing fire.

"He came and subjugated demonesses by using his penis," explained Nidup, a devout Buddhist and co-author of a book on Bhutanese proverbs. "He would meditate and develop inner heat that turned his phallus into a hot iron bar that he used to burn them."

As a result, in rural areas the male organ features as paintings or carvings on homes as a sort of tribute, as well as a guard against evil and protection from infertility.

In Thimphu, however, where a construction boom of apartments and shopping centers is transforming the steep-sided valley that cradles the city, attitudes have changed.

"The people in the cities are much more influenced by what would be appropriate images in the West. They don't see these sorts of things elsewhere," he told Agence France Presse.

Preservation of the national culture is one of the four pillars of Bhutan's famed approach to development which sees the country target "Gross National Happiness" instead of economic development measured by Gross National Product.

Citizens are required to wear national dress at government offices, meditation has been introduced in public schools and religious festivals are widely supported.

Tourism has been deliberately restricted to reduce its impact on the environment and society, with foreign visitors required to pay a minimum of $200 a day and travel with local guides.

"I notice that my own generation to our children's generation we can see change," says Karma Tshiteem, the secretary of the Gross National Happiness Commission, a state agency that vets and proposes policy.

"The change is particularly pronounced in urban centers like Thimphu," he said, adding that consumerist attitudes that make buying a bigger car the overarching priority are creeping in.

The biggest influence for him is something the country kept at bay until just 12 years ago.

"The greatest impact is taking place through the TV. We have 40-50 channels for less than 10 dollars. It's the kind of values that come with the sitcoms and all those sort of programs."

On the streets of the capital, citizens in traditional dress mingle with youngsters in shiny new trainers and baseball caps.

Shops selling arrows for enthusiasts of archery, the national sport that is avidly followed, stand next to video game parlors packed with youngsters drinking Coke and using Facebook on their mobile phones.

On any Saturday night in the Department of Sound nightclub, hundreds of teenagers and twenty-somethings dance, smoke, flirt and drink in scenes familiar in Tokyo, Hong Kong or any other modern Asian city.

Ura from the Centre for Bhutan Studies says the change in attitude to the phallus in Thimphu, which is luring increasing numbers of job seekers, underlines the growing divide between young and old, as well as urban and rural Bhutan.

An estimated 70 percent of Bhutanese still live off their land in villages perched high in the valleys of the Himalayas. Many areas are still only accessible on foot.

In many of these areas, wooden phalluses are still used in "lewd and irreverent" rural festivals, while others are positioned in fields to protect animals, Ura says.

"Usually people don't realize what they have lost. Only afterwards they do. The culture of Bhutan which is influenced by Buddhist values is something that is 2very valuable to be preserved," he explains.

The public display of the male organ remains a positive influence, he argues, reminding people of the dangers of temptation and the unnecessary domination of affairs by men, as well as the commonplace existence of sexual activity.

Tshewang Nidup, looking out from his vantage point on the edge of Thimphu across pristine mountain forests and glacial meltwaters, worries that too much change is coming to Thimphu.

"Visitors should come sooner rather than later. In 10 years time, it will be ruined," he says.