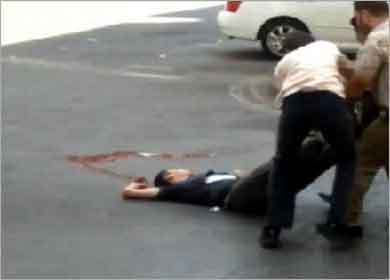 Syrian security forces killed at least 20 people on Wednesday, including 17 in a tank-backed raid on the flashpoint city of Homs, activists said.

The Local Coordination Committees, which organizes the anti-regime protests on the ground, said 17 people were killed in the central city of Homs, one in Hama to the north and two in Sarmin, Idlib province.

The forces used "gunfire and stun grenades to terrorize the people near the police headquarter around the citadel at the downtown," the LLC said in a statement sent to Agence France Presse.

The activists said forces backed by tanks swept early morning into Homs, where communications and Internet services were cut in many neighborhoods.

The Britain-based Syrian Observatory for Human Rights said "military reinforcements including 20 truckloads of soldiers entered the city," and that there was "intense gunfire in the market and governorate headquarters."

"Many ambulances were roaming the streets of the city," it added.

Heavy machinegun fire was heard in the Bab Dreib and Bostan Diwan neighborhoods of Homs after 2,000 protesters had set out for the area following the deaths of four people near the city on Tuesday.

The activists said demonstrations also took place in several other parts of the strife-torn country, including Hama, but that a massive clampdown prevented rallies in the port of Latakia.

The United Nations says 2,200 people have been killed since democracy protests flared in Syria in mid-March.

Syria's regime, which has promised to launch a wide range of reforms to appease the protesters, blames the unrest on foreign-backed "armed terrorist gangs."

Head of the resistance
Front of the Struggle ???
Are they practicing for the holly resistance Lebanese politicians keep singing along with Israeli American agenda.....
from Sayyed Nasrallah to Berri to Aoun to Samaha to Karami.....( even the famous minister of Sports...)
It is a shame butchery as you can not compare it to Nahr El Bared.
Just civilian demonstrators.....however the longer it lasts the more infiltrators and trouble makers will Join.....

ASSad supporters say it is just ketchup. ASSad is finished, he just doen't want to accept it yet.

We are Speechless, the united nations will pay an expensive price for sitting idle and doing nothing for a regime killing his people daily versus hanging Saddam for doing the same thing.