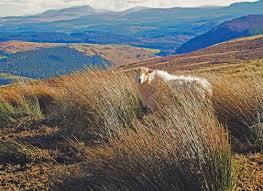 There is the riddle of the Bermuda Triangle. The unresolved identity of Jack the Ripper. The enigma of how the Universe developed beyond a quark-gluon soup following the Big Bang.

And then there is the Sheepdog Mystery.

A puzzle that has niggled mathematical minds for years, the Mystery is this: how does a single dog get so many selfish sheep to move so efficiently in the same direction?

The answer, revealed on Tuesday in a journal published by Britain's prestigious Royal Society, is that sheepdogs cleverly follow a simple rulebook.

Researchers fitted highly accurate GPS tracking devices into backpacks that were then placed on a trained Australian Kelpie sheepdog and on a flock of 46 female merino sheep in a five-hectare (12-acre) field.

They then used the GPS data to build a computer model of what prompted the dog to move, and how it responded.

Sheep cohesiveness is the big clue.

The dog's first rule is to bind the sheep together by weaving around side-to-side at their backs, and once this has been achieved, it drives the group forward.

"It basically sees white, fluffy things in front of it," said Andrew King of Swansea University in Wales.

"If the dog sees gaps between the sheep, or the gaps are getting bigger, the dog needs to bring them together."

Daniel Stroembom of Uppsala University in Sweden explained: "At every step in the model, the dog decides if the herd is cohesive enough or not.

"If not cohesive, it will make it cohesive, but if it's already cohesive, the dog will push the herd towards the target."

Single sheep dogs can successfully herd flocks of 80 or more sheep in their everyday work and in competitive herding trials.

But the model suggests that, in theory, a dog could herd more than 100 by following the two simple rules.

In contrast, other attempts at resolving the Sheepdog Mystery are more pessimistic. They say that 50 sheep would be the limit -- beyond this, another dog (or a human) would be needed to close up the gaps.

The study, published in the Journal of the Royal Society Interface, comes with an intimidatingly geeky headline: "Solving the Shepherding Problem: Heuristics for Herding Autonomous, Interacting Agents."

But the work goes beyond scientific curiosity, said the authors.

"There are numerous applications for this knowledge, such as crowd control, cleaning up the environment, herding of livestock, keeping animals away from sensitive areas and collective or guiding groups of exploring robots," said King.