Hollande: Assad is No Anti-terrorism Partner but a Jihadist Ally 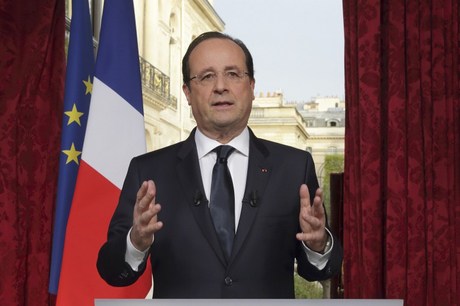 Syria's Bashar Assad is not the West's partner in the fight against terrorism but an ally of Islamic extremists wreaking havoc in Syria and Iraq, French President Francois Hollande warned Thursday.

"Assad cannot be a partner in the fight against terrorism, he is the de facto ally of jihadists," he told a Paris gathering of ambassadors from around the world.

His comments came after Assad's regime said on Monday it was willing to work with the international community, including Washington, to tackle extremist fighters in the war-ravaged country.

Hollande also touched on other crises around the world, including Ukraine where Western intelligence believes Russian army units are operating as part of a four-month conflict that has seen more than 2,200 people lose their lives.

"If it turns out that there are Russian soldiers present on Ukrainian soil, it would be intolerable and unacceptable," he said.

And on Libya, which he said was his current "major concern", Hollande called on the United Nations to provide special support for authorities in the north African nation, which is sliding ever deeper into chaos as militias fuel an escalating war.

Over the past weeks different factions in the country have backed rival prime ministers and national assemblies, while Egypt and the United Arab Emirates have carried out air strikes against Islamists.

At the weekend, Islamist fighters seized Tripoli airport, compounding a crisis that has been boiling since the fall of long-time dictator Moammar Gadhafi in 2011.

"France asks the United Nations... to organise exceptional support for Libyan authorities to restore their state," he said, without detailing what form this support should take.

"There is total confusion" in Libya, he warned.

"Jihadist groups have taken control of important sites and not only oil sites. There are two parliaments, two governments -- even if for us there is only one legitimate one -- and there are militias," he said.

"If we do nothing... terrorism will spread to all this region."

But Mr. Hollande mowaten and flamethrower say Assad is secular and not allied with terrorists.

Who cares about what hollande says? Not even his own people
http://www.bloomberg.com/news/2014-04-14/hollande-popularity-sinks-to-fresh-record-as-new-premier-shines.html

18% of french people approve of him.. rofl

flamby is desperate and trying to appear like he's relevant internationally by reciting commonplace statements. reminds of when he said he'd go to war against syria even alone if he has to. then a few days later the US abandoned the idea and he went straight to his kennel.

also, how come da3esh is equipped with famas assault rifles? to find who the "jihadist allies" really are, just follow the monney and weapon trail

M16s and AKs are easily findable everywhere. Famas isnt and costs several thousands dollars. Until recently it was only found in the french army

what a great answer! Sounds like an arms dealer

everybody warned that the arms sent to FSA (not SLA) would end up with extremists, and they did.
FSA was nothing more than a "politically correct" cover to make it ok to send arms to mercenaries and extremists against syria.

lol you're such a silly person anonyme. sorry but it's a fact.
maliki did not "give" anything to ISIS, it's ex-officers from the saddam era who deserted and joined ISIS because they never got over the fact that power shifted form sunni to shia in iraq.

if you ask me, it was wrong to install a sectarian system as mode of government in iraq, because is a sure way of creating sectarian tensions. one just needs to see how well it worked in lebanon. i'm pretty sure the US did it on purpose when they invaded iraq, to make sure divisions would be created along sectarian lines. divide and conquer, same old same old.

Yes, Assad is pro al nusra and ISIS! Assad is allying with the "rebels" that are killing his army, destroying his country and slaughtering his own alawite people's along with the Christians and Druze! The only peoples allied with these extremists are the once secular Turkey, France's bestest friend Qatar, and the "others" that are now realizing they have awoken their "gimp". Their gimp being extremists crazy jihadists fighting the entire world to establish an Islamic caliphate! Noone completely understood the attraction to the disenfranchised and mentally unstable Muslims around the world. Now it threatens the hand that feeds them!

Don't worry, Qatar still supports you! Google Qatari influence in France. Now it wont be a surprise when Le Pen destroys Hollande at the next election.

i bet he's also behind the FSA and NATO ;)

If Mr. Hollande has lost his mind, is Lebanon in jeopardy?
No, Lebanon lost its own mind many years ago and has had no trouble. Being a refugee in your own country, even when your own sect is the elite, supposedly, is a good way to discover the freedom on insanity.

They use a script prepared by the ASSad regime, and be beyond that, they have no clue. Typical drones...

My family and I are elated at your re-appearance and look forward to more comments from you. Thank you Flamethrower for all the joy you have brought into our lives. Something another!

a few days ago i thought you were sometimes a funny troll, but i didnt mean to encourage you to repeat the same thing everyday. after a while it becomes simply boring.

"If it turns out that there are Russian soldiers present on Ukrainian soil, it would be intolerable and unacceptable,"

All the luck for you and your allies!

pansergen
Even womanizing isn't exactly his forte. look at his score

We should introduce Hollande to another nobody...Fadi Karam (-:
Sure they will have a lot to discuss / share

Yes, Mr. Zionist paid Hollande. The west and Gulf countries who have sent billions of dollars and weapons to these armed Takfiri groups are "anti-Terrorism". There is no difference between the Takfiri Al Nusra, Islamic Front. or ISIL. TODAY, Hollande and his allies are Anti ISIL because they attacked the oil fields in North Iraq and their Kurdish separatists allies, AND they have been attacking other Takfiri groups in Syria instead of ONLY attacking the Syrian regime. If Assad STOPS allowing weapons to flow to Lebanese resistance in Lebanon, I am sure him and his American bosses will see Assad as a GREAT ally against "terrorism"

I was asking myself the same questions flamethrower

Libya present chaos is the direct policy and action of France; now Paris started to feel the heat. With Hollande type of leadership, it is not surprising to see France economy in shambles.
Miniature leaders for great countries...

The West have been for years supporting Jihadist "terrorists" going to Syria to fight the Syrian regime. What changed was ISIL attacking the oil fields in North Iraq and other Takfiri groups in Syria. This is why NOW Some pro Israeli western countries have declared war ONLY on ISIL.

looks like Hollande's comment struck a nerve and all the propagandists are out in full force performing damage control.

my friend, nothing is new...the British, Israel, Qatar, Saudis, America and France find another way to atack Bashar...after the Bristish Parlament and...stoped the war machine against Bashar...

Tric- If you lived in Lebanon at any point before the year 2000, under no circumstances whatsoever would you ever consider portraying the syrian regime as a victim in any shape, way or form. Please don't lecture me on the need to support a mass murderer of my countrymen, family and friends. He deserves a death no less painful than that of the thousands of prisoners tortured to death under his command.

the problem know in 2014 in not in Lebbanon and Syria...is how can the cristhians in the region can be protected...Portugal in the civil war of Spain could help to the destrution and the split of Spain , but chose protect the cristhianity...and the unity of Spain! and remember that Spain never understand a iberic map with Portugal independent...

but that happening when Portugal was in the hands in cristhians, now in 2014, the jewish-qatar take the control of the portuguese political-diplomatic with their money

Tric- I know nothing of Portugal and have no desire to embark on that journey nor any desire to decipher your absurd conspiracy theories. As for Lebanon, don't flatter yourself, Us Christians can protect ourselves the same way we did back then. We certainly don't need protection from a mass murderer. Only cowards go by the slogan of "the lesser of two evils".

The Lebanon Army must made a aliance with the Syrian Arab Army...what is happening in the region do not be dependent of what the west want to the middle east...after their huge and criminal "mistakes" in the region...

Says the president of the country exporting largest number of terrorists in the world!

his saudi buddies too, are allies of jihad and terrorism.

They hate the west, but hey live and collect welfare? Canada should deport all Hizbcoacaine supporters.