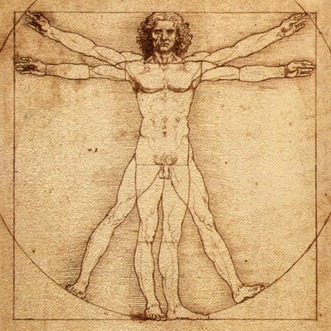 An artist has recreated Leonardo da Vinci's most famous sketch "Vitruvian Man" in the Arctic ice to draw attention to the ice melt, Greenpeace said Wednesday.

The Arctic ice cap has shrunk to almost the same level as in 2007 when it was at a record low.

An artist specialized in aerial art, John Quigley, travelled to the region on board a Greenpeace ice breaker and reproduced da Vinci's most famous drawing -- depicting a man in two superimposed positions with his arms and legs apart -- some 800 kilometers (500 miles) from the North Pole.

The artwork, which Quigley entitled "Melting Vitruvian Man", measures the equivalent of four Olympic-size swimming pools. The man's two arms and one leg have been cut off, symbolically melting into the sea to illustrate the disappearing ice.

"Literally climate change is eating into the body of our civilization," the artist explained in a video clip published by Greenpeace.

The ice cap has never been as small as it was in August with the exception of 2007, according to the U.S.-based National Snow and Ice Data Centre (NSIDC) which began its satellite measurements in 1979.

Several forecasts suggest the Arctic ice cap could disappear entirely during the summer months within a few decades.

While that is bad news for environmentalists, the phenomenon could be a boon for oil companies who hope to be able to gain access to oil and gas deposits that are unexploitable under the ice, and to shipping companies which could see shorter shipping routes with access to the Arctic waters.