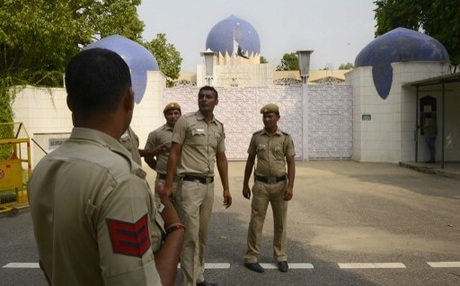 Police have arrested three men over the suspected rape and murder of a teenager who had protested against village elders' harassment of her father in India's east, an officer said Wednesday.

The father of the 16-year-old said she went missing after trying to save him from being attacked by village elders as punishment for failing to repay a loan, according to the officer.

Elders of the village council in West Bengal state instead turned on the girl on Monday night and demanded she lick spittle off the ground, the NDTV network quoted villagers as saying.

The girl had begged the elders not to thrash her father, who had been brought before them over the loan to borrow a tractor, local media reported.

"Her father named 13 persons in the complaint. We are investigating the case," said Kujur, who visited the crime scene in Jalpaiguri district.

"The girl went missing after she protested at the village council, who had called her father asking him to settle his dues for hiring a power tiller from a villager."

Police said the girl's body, discovered on Tuesday morning, has been sent for post mortem examination as police attempt to unravel yet another case of suspected sexual violence.

India introduced tougher laws to deter rapists following public outrage over the 2012 fatal gang-rape of a student on a moving bus in New Delhi.

But attacks against women have continued unabated in many parts of the country.

Police found the girl's body on railway tracks near her home in Dhupguri village 680 kilometers (422 miles) north of Kolkata.

They have arrested three members of the village council for questioning but no charges have been laid.

Council elders told local media they were not involved in the girl's death and said they had not assaulted the father.