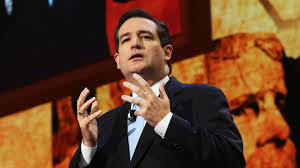 U.S. Senator Ted Cruz was booed offstage at a conference for Middle Eastern Christians, causing a disruption at the gala dinner of the In Defense of Christians summit in the U.S. capital Washington.

He enraged audience when he pointed out that “Christians have no greater ally than Israel,” slamming religious extremism as “cancer.”

Cruz noted that Islamic groups like Palestinian Hamas movement, Hizbullah and the Islamic State of Iraq and the Levant (ISIL) are carrying out “genocidal campaigns,” saying that the three groups are one.

Laham was determined to withdraw from the gala dinner until Cruz left the room.

“Who kicked off Jews from Lebanon, Syria and Iraq?” Laham wondered, refusing to hear such words.

The audience started disagreeing with Cruz and booing him, calling on him to get off stage, which prompted him to say: “Those who hate Israel hate America. Those who hate Jews hate Christians. If those in this room will not recognize that, then my heart weeps.”

Maronite Patriarch Beshara al-Rahi called on conferees not to “reply to the Senator as the work of the conference is far more important than individual statements.”

For his part, the President of In Defense of Christians, Toufic Baaklini, lauded al-Rahi, quoting him as saying: “At every wedding, there are a few wedding crashers.”

“In this case, a few politically motivated opportunists chose to divide a room that for more than 48 hours sought unity in opposing the shared threat of genocide, faced not only by our Christian brothers and sisters, but our Jewish brothers and sisters and people of other all other faiths and all people of good will,” he said in a statement.

The three-day conference aims at discussing the situation in the Middle East and the conditions of Christians. It gathered Orthodox Christians, evangelicals, Roman Catholics and others.

The Middle East is the home for about 12 million Christians, which constitute around 5 percent of the region's population.

Been telling m14ers forever... You should listen next time instead of following stooges like geagea. These crazies want nothing but your destruction whether you are christian muslim whatever as long as ur not pro zionist masters, u r their enemy.

he has obviously been born again.

can you ask this senator how many Christians are left in occupied Palestine(3israel )?
then you how much Zionists care for Christians

The Christians are the real loosers in this. The can not see friend from enemy and that is why we are loosing our ancestors soil.
In every arabic country the christians are treated like shit and still we hold on the the criminals. The christians of Middle East are suffering from "the Stockholm syndrome".
Ted Cruz is Wright in his speech!

Since the 1970s most US politicians have had no honor. They have created an electoral system totally skewed by money and lobbying.
US policy has been for a while totally pro-Israel, although it is not moral nor is it in the interest of the US or global security.
US policy, especially since the end of the cold war, is responsible for the mess we are witnessing in the Arab world.
A global balance of power needs to be restored to put a stop to this US bully.

Good Arguments. The US have always gone from one quagmire and failure to another Guagmireand failure. The world is always changing. A big difference that will lead to change is the changing demographics. The old population is increasing significantly. The US will need to choose between huge military budget and taking care their aged population. If they continue their spending on wars, then they are going to be forced to cut the increased costs on Medicare, which means increasingly seeing their parents and grandparents die due to lack of medical care.

“If you hate the Jewish people you are not reflecting the teachings of Christ. And the very same people who persecute and murder Christians right now, who crucify Christians, who behead children, are the very same people who target Jews for their faith, for the same reason,” Cruz continued.
.
He criticized the audience, saying: “If you will not stand with Israel and the Jews, then I will not stand with you.”(...)
.
.
we now...look what america donne to the Cristhians in Levant...and look what america donne to the Israelis...one is desapearing in the face of the Earth...the other, the population in the region are increasing exponential...thanks america!

He is a POLITICIAN and an opportunist. It really does not matter what his religionis because he worships power and the dollar bill.

Another Israeli puppet. Nothing to see here.

Because the Jews (Zionists) had a long term strategy of winning American Public Opinion. They executed it brilliantly resulting in complete turn around from anti-Israel sentiments (in the 60s), to indifference (in the 70s), and then strong pro-Israel sentiment (last 20 or so years). They succeeded in painting Israel as the only Pro-West Democracy that can be counted on as an ally. At the same time they painted the Arab States (including Lebanon's HA) as the blood thirsty monsters that want to throw the civilized Israelis in the sea. The Arabs (including HA), did a wonderful job proving the Israeli propaganda to be a true image of Arabs and Muslims.
We have no one to blame but ourselves (all Arabs)we have done more harm to our cause than Israel could ever had. When a Westerner think ISIS, HA, NUSRA, HAMAS all they think of is crazy elements and killing machines.

"They succeeded in painting Israel as the only Pro-West Democracy Helicopter", .....Yes, and they censor any massacres Israel commits in the corporate mainstream media and Israeli Apartheid policy. It has little to do with what ISIS, HA, NUSRA, HAMAS (remember Mandela was called a terrorist for most of his life).

Even though the Zionists number less than 1% of the population, the Zionists in America have a lot of money and influence in the US. The KSA and Gulf countries have more money and can have more influence on the US. The problem is that these hated Gulf dictators do not represent their people and they use more than 99% of the country's wealth on themselves and trying to stay in power, not standing up to Israe, which is what the populace want.

The majority of the political elite in America who run the country are NOT zionists. What should the political elite in America not be 99% pro-Israel IF the Arab dictators do nothing (nevermind militarily)politically and economically? For Example, KSA and ALL Arab states have made it clear to the US and the entire world that if any Embassy moves to ANYWHERE in Jerusalam including West Jerusalem, ALL ARAB states will break relations with that country. Today, there is not a SINGLE country in the world who has moved their embassy to West Jerusalem. ALL LEBANESE and ARABS PLEEEEASE who want to have a future in the middle east, stop trying to please the pro-Israeli countries because they will have zero respect for you. The problem is not the people in the Arab world, but the worthless puppet hated tyrant rulers I always mention.

Senator Ted Cruz, you are a cheap sellout like Quentin Tarantino. Jews and Christians have a common enemy but that doesn't make them allies.

Remember that it's the Jews who do not recognize Christ and his teachings.

Why did they invite this anti Arab heavily zionist paid clown to this conference??? That is so dumb. This charade will bring him more money for his political campaign. Would a Pro-Israeli conference invite ANY Middle Eastern Christian Patriach or a politician who is milidly critical of Israel? To be respected, people in the US have to stop trying to please those who hate you for whatever reason.

Wait isn't this the right winger that FT loves?

He's not only a Zionist gimp because of elections but he obviously doers recall Christian history.

This guy is a disgrace.

Christianity's roots are from Judaism. That is why Christians feel closer to Israel than Muslim countries. Also Muslims states that non-Muslims are Infidels that deserves to die. Can you blame Ted Cruz or any Christians not to trust a Muslim? I'm sure most of you are going to label me as a Zionist which is far from the truth.

LMAO! The Cruz missile sinks another ship. I mean seriously, inviting a Tea Party ultra-conservative fear-monger (only yesterday, on the anniversary of 9/11, he went on CNN to declare that there are ISIL operatives on the Mexican border - without the slightest proof, as always) to ANY summit is inviting disaster.
Now boo-hoo-hoo, Ted got booed off stage by the very people who he was there to help. Bet you he's gonna go cry on Michelle Bachmann's shoulder now...