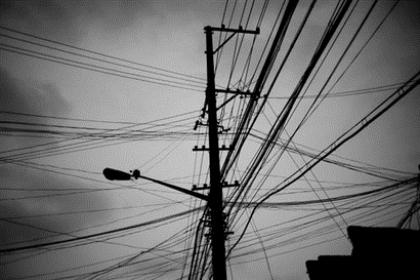 A major power cut hit Lebanon on Monday from its south to north, including the capital Beirut, without an immediate explanation for the blackout.

According to the state-run National News Agency, the power outage hit all the Lebanese areas and Beirut at 9:20 am.

It pointed out that the Electricite du Liban and the Energy Ministry failed to explain the reason behind the cut.

MTV reported that the power outage was caused by a malfunction at the Zahrani power plant.

EDL Director General Kamal al-Hayek told Voice of Lebanon (93.3) that employees are working on fixing the sudden electricity disruption, denying that the malfunction is linked to the contract workers crisis.

Most of Lebanon has been plunged into darkness recently as the gap between the EDL contract workers and management increased, threatening further electricity rationing.

The contract workers have been on an open-ended strike for the past four weeks and have closed the gates of the company's HQ in Mar Mikhael.

The rift between EDL board of directors and the contract workers increased when several of them erected tents at the EDL HQ and sealed off the gates to press the company to adopt their full-time employment.

The company's board of directors has claimed that a law, adopted by parliament in April, only allows 897 workers to become full-timers.

The contract workers prevented two weeks ago full-time employees from entering the premises of the company's HQ, prompting Hayek to describe their acts as “outrageous.”

He accused them of “taking the company hostage” to press the implementation of their demands.

Hayek and Energy Minister Arthur Nazarian had warned on different occasions that the country will plunge in darkness if the “occupation” didn't end.

EDL board of directors issued later on Monday a statement urging contract workers to abide by the law and end the month-long paralysis at the company.

“The company only implemented the law by its decision to fill only the needed vacancies,” a statement issued by EDL said.

However, the contract workers criticized the statement, pointing out that it's not official, but the company hit back at them stressing that the statement is official and legal and was written at presence of the Energy Minister.

“We are not responsible for the power cut across Lebanon,” head of the committee Lebnan Makhoul told reporters, accusing the company of turning the public opinion against them.

“Employees can enter the company's HQ to take the necessary equipment to fix the electricity malfunction,” Makhoul added.

More pressure on the government to employ those that are unemployable.

Arrest all of those obstructing the work of the full-time employees. They can protest all they want, but they shouldn't be allowed to take the entire country hostage. This is ridiculous.

Hell with contract workers & same goes to director & minister! u are all the same thieves...

contract workers told openly to regular employees to pass & pick up spare parts..but nothing
we have to live w/o electricty, water, ect....

Why, what has changed? We never had electricity from EDL anyways :)

Time for berri to go..he can't even force his members to elect a president so how many failed politicians do we have to keep carrying..

Nothing goods comes from the public sector in Lebanon, besides the central bank & the army, everything thing else should be privatized.
It is the private sector that helped build Lebanon not the public sector and it is the "private" Lebanese emigrants that excell abroad not the inefficient goverment.
The sooner we privitase the energy sector the better it is for the Lebanese economy.
In Tunisia, 25% of the national electricity needs are generated by Carthage Power Co. a private Independant Producer that is somehow related to the pheniceans, why don't we just replicate, electricity is not sectarian after all..

lol both players are m8 and you still blame m14. clown

FT, you blame them for everything, now pay your electricity bill.

Maybe certain individuals can actually pay for the services provided?

M14 and ouwet are behind this outage..can you tell me if the hizbollah telecommunication network that was stolen from the government can run w/o power?