Despite Beheadings, U.S. Against Hostage Ransoms 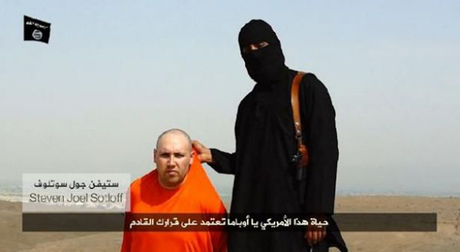 Executions by jihadists have not changed Washington's opposition to paying hostage ransoms, leaving it at odds with the European allies it hopes will join the fight against extremists in Iraq and Syria.

Several European nations are believed to have secretly paid millions of dollars to save their nationals, including some held by the Islamic State group that beheaded two U.S. journalists.

U.S. President Barack Obama has privately vented his frustration about the practice, according to the New York Times.

The paper said that during private a chat with media columnists, Obama expressed "irritation" with French President Francois Holland over his alleged negotiations with extremist groups.

The remarks highlight pronounced differences between how U.S. and British authorities address demands by extremists, including IS, and how their European counterparts do.

"This is kind of a perennial issue, we go through this quite often frankly," said Julianne Smith, who was deputy national security advisor to Vice President Joe Biden until last year.

Daniel Benjamin, the State Department's coordinator for counterterrorism between 2009 to 2012, said the U.S. "pressure that has been exerted on some of these governments has been considerable, and it goes up to the highest levels of the United States government and I'm quite certain that it will continue."

"This practice is keeping terrorist groups in the field and it's unacceptable," he added.

"What matters is not your signature on a declaration, but not letting money be paid to terrorist kidnappers," Cameron said.

The effect has been negligible. According to Reporters Without Borders, 12 foreign journalists have been released by IS, most probably following ransom payments.

Italy has come close to confirming such payouts, and a Times survey found that Austria, France, Spain and Switzerland have paid tens of millions of dollars to Al-Qaeda to free hostages elsewhere.

U.S. journalists James Foley and Steven Sotloff, and British aid worker David Haines, have been beheaded by an IS militant, and several Syrian reporters have been executed.

One exception was American writer Peter Theo Curtis, who was freed in August by Al-Qaeda's affiliate in Syria.

Some here now criticize the no-ransom policy, warning that refusal to negotiate has brought the US closer to war.

Publication of the decapitation videos "has done more damage than any ransom ever could," argued Sarah Shourd, who was detained in Iran from 2009 to 2011.

Shourd told CNN that a 26-year-old American woman, her name a secret, is being held by the Islamic State group, which has reportedly demanded $6.6 million for her release.

"Is that amount of money not worth it to save this woman's life?" Shourd asked.

James Foley's mother Diane and father John defied government advice and began raising funds for a ransom but were told by US officials that they would be forbidden by law from paying up.

US officials insist Washington's position has made groups like Al-Qaeda or IS less keen to take Americans hostage.

And Matthew Levitt of the Washington Institute argued that the value of US and British hostages is not necessarily financial.

"They're looking for a large propaganda reward," said Levitt, a former top anti-terrorism official at the Treasury Department.

The White House and Cameron have stressed that recent executions, ghastly as they were, would not change their line.

Nor would they likely prod Congress into action. US lawmakers told AFP they recognize the moral quandary and grieved for the victims' families, but would not alter US policy.

"I think the French shouldn't pay ransoms, but that's up to them," Senator Lindsey Graham said.

Yet there was a lively debate in May after five Taliban detainees were exchanged for US Army Sergeant Bowe Bergdahl, who was held as a prisoner of war for five years in Afghanistan.

Smith said Americans were willing to ask tough questions about that exchange, "and yet the paying of ransoms doesn't seem to be getting traction. It's curious."