British PM ahead in Polls after Two Years 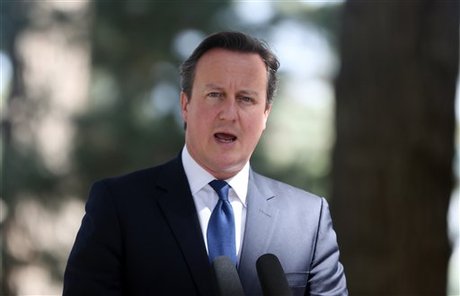 Cameron's address on Wednesday promised tax cuts for 30 million workers if the Conservatives win the May 2015 general election and his speech was largely seen as a pitch to be returned to office.

The poll put the center-right Conservatives on 35 percent, with the opposition center-left Labor Party, led by Ed Miliband, on 34 percent.

The populist United Kingdom Independence Party (UKIP) was on 14 percent and the centrist Liberal Democrats, the junior partner in the coalition government, on six percent.

If replicated at the general election, with an even swing, such figures would, due to the formulation of Britain's constituencies, likely still leave Labor comfortably the biggest party in parliament but slightly short of a majority.

The survey found people expect their finances to suffer less under a Conservative government, but believe they will be poorer in five years' time irrespective of who wins.

"Can the Tories turn their big lead over Labor on the economy into extra votes as the election approaches? Can Miliband persuade floating voters that he is up to the job of prime minister?" he asked.

He also said it was unclear whether UKIP could hang on to the mainly Conservative voters it had won in the past two years, if the Liberals could revive their "terrible fortunes" and whether the Scottish nationalists could overrun Labor strongholds in Scotland.