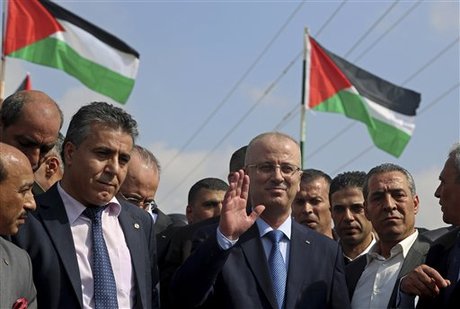 The Palestinian unity government held its first ever meeting in the war-ravaged Gaza Strip on Thursday as its rival factions presented a common front ahead of a major donors' conference.

The gathering came more than four months after the government was sworn in following a landmark reconciliation deal between Fatah and Hamas.

Palestinian Prime Minister Rami Hamdallah crossed into Gaza on Thursday where he visited some of the areas of the Strip worst-hit by a 50-day Israeli military operation against Palestinian militants.

He later met with his ministers at the Gaza property of President Mahmud Abbas, an AFP correspondent said.

"What we have seen today is dreadful and painful, and it has become clear to us that the rebuilding (of Gaza) is at the top of our list of priorities," Hamdallah said.

The conflict, which ended on August 26, killed nearly 2,200 Palestinians, most of them civilians, and 73 on the Israeli side, mostly soldiers and also left 100,000 Gazans homeless.

"We are facing a humanitarian and moral duty to our people in Gaza," he said after entering Gaza via the Israeli-controlled Erez crossing.

"We have put the years of division behind us, and the most important priority of the government is to guarantee a return to normal life for Gazans and unity with the West Bank."

At a press conference after the cabinet meeting, Gaza's former Prime Minister Ismail Haniya, a leader of Hamas, urged Fatah and Hamas to follow through with their reconciliation pledges.

"This meeting strengthens Palestinian unity and the end of a division we have lived for years and which has harmed the nation and (our) politics," Haniya said.

"We emphasize the need for the success of reconciliation, in all its forms, and the need to work together for this government to succeed in its mission."

The cabinet's composition was agreed in June between bitter rivals Fatah, which dominates the West Bank-based Palestinian Authority (PA), and Hamas, which remains in de facto control of Gaza.

But Thursday's meeting was its first in the besieged coastal territory, and the first its Gaza-based ministers could attend, after Israel blocked their travel to the West Bank to be sworn in.

Egypt will host a donors' conference on financing the reconstruction of Gaza on October 12.

The Palestinians have called for more than $4 billion in aid to rebuild Gaza's infrastructure and provide humanitarian relief to the blockaded coastal territory, which is one of the most densely populated areas of the world.

Palestinian foreign minister Riyad al-Malki said the meeting aimed to show the international community that its donations to rebuild Gaza would be overseen by the PA, and would not fall into the hands of Gaza militants.

"The consensus government meeting in Gaza is additional proof to the countries participating in the Cairo conference that there are no questions over the PA's influence in Gaza, and its taking on the task of reconstruction," he said Wednesday.

The unity government was formed under an April reconciliation deal between the Palestine Liberation Organization, which is dominated by Abbas's Fatah party, and Hamas.

But the deal soon suffered setbacks, notably over the issue of who should pay the salaries of Hamas employees in Gaza after its own government disbanded.

Hamas won the last round of Palestinian legislative elections in 2006, and ousted Fatah from Gaza in fierce fighting the following year.

The two sides agreed last month that the new unity government would begin administering the Strip, and would oversee the imports of building materials for reconstruction.

Israel is reluctant to ease the blockade it imposed on Gaza in 2006, saying that materials could be used by Hamas to make weapons and attack tunnels.