IS Jihadists Boast of Enslaving Yazidis 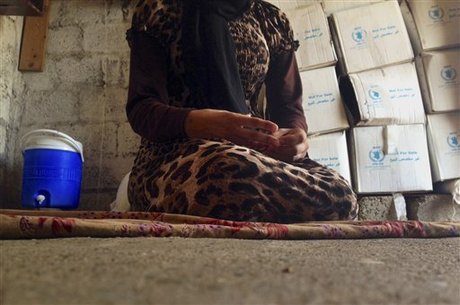 The Islamic State jihadist group says that it has given Yazidi women and children captured in northern Iraq to its fighters as spoils of war, boasting it had revived slavery.

The latest issue of its propaganda magazine Dabiq released on Sunday was the first clear admission by the organisation that it was holding and selling Yazidis as slaves.

Tens of thousands of Yazidis, a minority whose population is mostly confined to northern Iraq, have been displaced by the four-month-old jihadist offensive in the region.

Yazidi leaders and rights groups warned in August that the small community faced genocide and that threat was put forward by Washington as one of the main reasons for launching air strikes.

Thousands of Yazidis remained trapped on a mountain near their main hub of Sinjar for days in August, while others were massacred and the fate of hundreds of missing women and children remained unclear.

In an article entitled "The revival of slavery before the hour", Dabiq argues that by enslaving people it claims hold deviant religious beliefs, IS has restored an aspect of sharia (Islamic law) to its original meaning.

"After capture, the Yazidi women and children were then divided according to the sharia amongst the fighters of the Islamic State who participated in the Sinjar operations," the article said.

"This large-scale enslavement of mushrik (polytheist) families is probably the first since the abandonment of this sharia law," it said.

"The only other known case -- albeit much smaller -- is that of the enslavement of Christian women and children in the Philippines and Nigeria by the mujahedeen there."

Dabiq argued that while the "people of the book" -- or followers of monotheistic religions such as Christians or Jews -- can be given the option of paying the "jizya" tax or convert, this did not apply to Yazidis.

The Yazidi faith is a unique blend of beliefs that draws from several religions and includes the worship of a devil figure they refer to as the Peacock Angel.