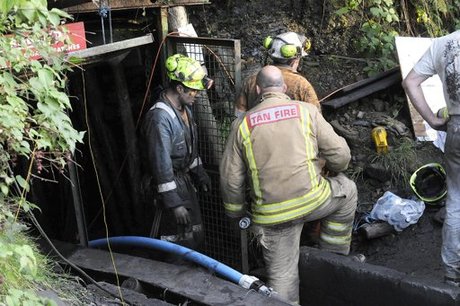 Hopes faded Friday for three miners trapped underground in a flooded colliery in Wales after rescuers battling treacherous conditions found the body of one man.

The news that one miner had been found dead came after divers were sent into the mine late Thursday after the men became stuck in the remote hillside colliery in south Wales earlier in the day.

But the divers were forced to turn back after travelling a short distance through the murky water that flooded the privately-owned Gleision Colliery when a retaining wall failed.

No contact has been made with the miners since they became trapped 90 meters (295 feet) below the surface with what one local lawmaker described as "debris, sludge and dark, dark murky water.”

Seven men were in the mine when the accident happened but three managed to escape as water surged into the colliery. One of the men is critically ill in hospital.

Police Superintendent Phil Davies said that the body of a miner had been found during the rescue operation overnight but emergency workers had not been able to recover the body and his identity was unknown.

"We are not in a current position to recover him from the mine and therefore we don't know the identity of that person," he said.

The families of all four men who had been trapped in the mine -- Phillip Hill, 45, Charles Bresnan, 62, David Powell, 50, and Garry Jenkins, 39 -- had been informed of the discovery of the body, he said.

A fire service spokesman however said there was still hope for the three other miners as it was thought they had split from the man who had been found dead and could be taking shelter in an air pocket elsewhere in the mine.

"It's still a search and rescue operation even though we have had a setback," said fire service spokesman Chris Margetts.

Families of the men from the tight-knit local community spent a harrowing night waiting for news of their loved ones at a nearby community hall.

Wales used to be a heartland of the British coal industry, but only a handful of mines are still operating anywhere in Britain following the decline of the industry in the 1980s.

Local Labor lawmaker Peter Hain described the accident as a "really, really bad situation in the depths of the tunnel itself, with debris, sludge and dark, dark murky water."

Prime Minister David Cameron expressed hope the men would be found and said he was thinking of "those missing and their family and friends at this very difficult time."