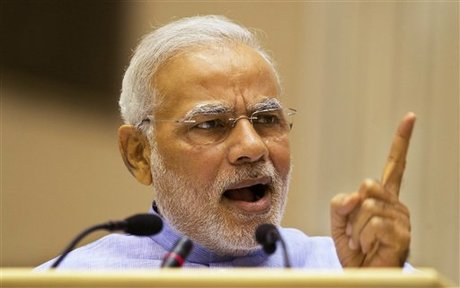 Nearly 100 million Indians began voting in state elections Wednesday in the first major test of Prime Minister Narendra Modi's popularity since he stormed to power in May on a pledge to reform the economy.

Five months after Modi's rightwing Bharatiya Janata Party (BJP) won a landslide national victory, voters are electing two regional assemblies -- in Haryana in the north and huge Maharashtra state in the west, of which Mumbai is the capital.

Modi has been campaigning extensively, particularly in Maharashtra, aware that an endorsement in state polls and especially in India's financial capital could help him push through his promised economic reforms.

As in the nationwide vote, the BJP is expected to benefit from anger and fatigue towards the Congress party, which was kicked out of central government in May and has held power in Maharashtra for 15 years, Haryana for a decade.

The BJP has taken a gamble on its popularity and is campaigning alone in both states after severing ties with its allies, including the far-right Shiv Sena, its partner in Maharashtra for 25 years.

In Maharashtra, India's second most populous state, Wednesday's newspapers were covered in advertisements for the BJP with large pictures of Modi, calling on the electorate to choose "an honest and stable government".

Modi came to power promising to wipe out widespread corruption and boost the flagging economy, but he is yet to bring in any much-needed major reforms to revive growth.

Instead, the nationalist leader has focused on small initiatives including bank accounts for the poor. The "big-bang" reforms such as changes in goods and services taxes could prove unpopular and need state support to succeed.

Modi, a fiery orator who dominated the national election campaign, has addressed 27 rallies across Maharashtra, where the BJP lacks a regional party figurehead, accusing his opponents of "destroying" the state during their rule.

"He has to once again prove he is a vote-getter. There's a lot at stake for him," said Sudheendra Kulkarni, a political analyst at the Observer Research Foundation think-tank.

- Polls predict BJP win -The Congress and its ruling ally in Maharashtra have been dogged by accusations of corruption, particularly linked to a huge alleged scam over irrigation projects and another regarding Mumbai apartments meant for war widows.

Analyst Kumar Ketkar, a former regional newspaper editor, said there was resentment among Maharashtra's BJP leaders at the publicly popular Modi's dominance of the campaign, but "they know they can't win without him".

Success for the BJP would boost its power in the nation's upper house of parliament, crucial for the passing of contentious laws. The BJP currently lacks a majority in that chamber whose composition is based on seats won in regional assemblies.

Maharashtra pollsters expect the BJP to emerge with the most assembly seats but say it may fall short of the 145 needed to rule on its own, which could lead to a reunion with Shiv Sena.

In Haryana, a wealthy state neighboring the capital New Delhi, the BJP is also predicted to emerge the single largest party in the 90-seat assembly, dislodging the traditionally dominant Congress.

Results in both states are due to be announced on Sunday.