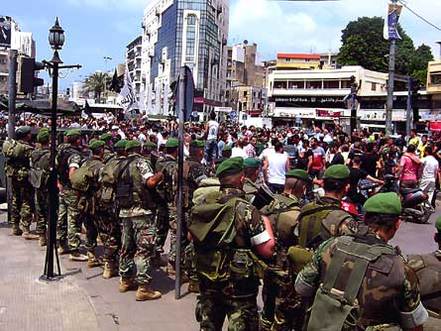 Discussions over a controversial Iranian grant to the Lebanese army have been “frozen” to avoid any rift between cabinet members as the United States pressed to “delay” the matter until other arming pledges are met.

According to the pan-Arab daily Asharq al-Awsat, Prime Minister Tammam Salam is stalling all discussions at cabinet meetings over the matter to prevent any crisis between its two main components Hizbullah and al-Mustaqbal movement.

Sources told the newspaper that Salam is “trying to avert a sharp governmental debate.”

Last month, the head of Iran's Supreme National Security Council, who made a one-day visit to Beirut, said that Tehran will provide military assistance to Lebanon.

The sources said that the U.S. also asked Lebanese officials “not to swiftly accept the Iranian grant until all other arming pledges are met.”

“The U.S. didn't reject the Iranian military assistance but pressed its postponement,” the sources pointed out.

Iran's offer of support follows aid packages for the Lebanese army from both its regional rival Saudi Arabia and the United States.

It comes as the Lebanese army is battling jihadists from al-Qaida-linked al-Nusra Front and the Islamic State group, who are entrenched on the outskirts of the northeastern border town of Arsal on the porous Syrian-Lebanese border.

The newspaper reported that Lebanon and Iran haven't received any official objection on the deal, noting that any progress in the matter is linked to Defense Minister Samir Moqbel's visit to Tehran on October 17.

Hizbullah's sources told Asharq al-Awsat that the party will discuss the matter with the cabinet members at the right time.

Saudi Arabia last year announced it would give the Lebanese army $3 billion to purchase weapons and equipment from France, but that deal has yet to be fully implemented.

In August, the kingdom offered another $1 billion in funds to allow the army to purchase supplies immediately.

Washington has also sought to bolster Lebanon's military, and recently announced it had delivered a new shipment of Hellfire missiles and would also supply light aircraft.

+1, the offer is political "muzayadeit". Ask HA to give its weapons to the LAF.

lol @ "too little, too late". it's been a year since saudi made a promise, yet nothing has arrived yet.
if the US (through their m14 pawns) do not block this aid, i can bet you it will arrive before the saudi one and include better equipment.

nothing has arrived? just because you say so? I think every time a bullet arrives, army command should send you an SMS so you will stop your propaganda. The facts are different than your fantasy world.

" can bet you it will arrive before the saudi one and include better equipment."
I tell you what, why bother with approvals, shipment, choice of equipment and the bureaucracy, Have HA give its weapons to the LAF and save us the hassle. It is all stored inside Lebanon and no need for shipments and headaches.

I have a better proposal... If hizballah loves the army so much let it hand over their weapons to the army and get theirs replenished through their sponsor Iran. This way it will help the government not having to deal with sanctions etc. and it will save face for hizballah. Will hizballah do it? Of course NOT!

disarm hezbollah and rely on what? no matter how much we support and respect the army, it cannot do much without a defense strategy and with corrupt politicians catering to US/israel/saudi/da3esh. how could the army defend lebanon against israel if our cowardly politicians prevent it from acquiring real weapons? the most likely scenario would be that if HA gives them the rocket they run to the US to surrender them because lebanon is "not allowed" (according to US imposed rules) to have long range rockets.

also, seeing how you guys cheer every time people are attacked in dahiyeh, the south or the bekaa, we clearly cannot count on you. so forget about realizing israel's dream. first you need to solve the above problems, then you can talk about hezbollah disarming.

furthermore, how come iran woke up after the Saudi grants to the needs of the army?

iran had repeatedly made offers to arms the army, since decades. it was always turned down by the m14 US/israeli pawns. you cant support m14 and blame iran for not arming the army at the same time, it's a total contraction.

You beat me to it mowaten. I was thinking the same thing, exactly the same! We are so so similar: we are both narcissists, both shia extremists who pretend to be moderates, both have an inferiority complex, both pretend to be secular, and both have multiple accounts. I just hope readers don't think we are the same poster.

mowate' ...Your premise is not backed by evidence and is debatable.

miqati refused it. like his peers in m14 miqati only cares about money, and a lot of it is in the US, where they threatened to freeze his assets.
in case you haden't noticed, miqati is more m14 then m14.

the day the UN will take real action against the US and israel, and really do something about their countless war crimes and violations of international laws is the day the UN will be worthy of consideration. in the mean time i could care less what they allow, let them go hug themselves.

muzayadet is done by people like the gulf countries and they give you billions to get weapons after 5 to 10 years and your not allowed even defensive weapons ie anti aircraft anti tank ,...and so on
Russian weaponnery is also muzayadet ????......remember the migs (who said no)
the muzayadet comes from Lebanese muppets who are agents to other countries and do not even dare arm their LAF

Iranian grant of weapons .the army can have it within 2 weeks
saoudi money grant will translate to weapons after they steal commissions and interests the weapons will arrive in years
god bless democracy

how come the Iranian help is accepted by pechmerga (Irbil) ally of the US and its not acceptable in Lebanon ?

+ oua nabka + (Guest) please stop using my screen name or sign in with your registered name. People are getting confused!!!

I have a better proposal... If hizballah loves the army so much let it hand over their weapons to the army and get theirs replenished through their sponsor Iran. This way it will help the government not having to deal with sanctions etc. and it will save face for hizballah. Will hizballah do it? Of course NOT!

absolutely arms should be in the hands of a capable army
but Lebanese should start disarming non Lebanese like Palestinian , Syrians ,...and then when strangers are disarmed and our army has all sophisticated arms we disarm Lebanese
the same people that are refusing to arm our soldiers are demanding the hizb to turn over his arms strange

your boss terrorist, was in france and he is good friends with the French
mr fabius I quote for sending arms to Irbil
French arms will be donated (free) to Irbil within hours
I think Beirut is closer to paris from Irbil
but some traitors in Lebanon do not want to arm our soldiers

Dreaming Idea.
It is the best time for HA to change its strategy by putting weapons and militias under the army command and let our army be yours as well and impose security of the country.
In case this good will is applied I (as Lebanese ) the first to enrol in a political HA party.

Our nabka,
If HA cooperate under the army command all the others (as you said Palestinians, Syrians etc) will be easily disarmed.

Hey Farzad you wanna really arm the Lebanese army just open your warehouses conveniently located all over Lebanon to the Lebanese Army's Ordnance and Logistics branch so they can choose what they truly need. The item you offer that were listed in al Akhbar a few days ago would be a good option in this was 1975 and the Lebanese army was a neighborhood militia.. Doushkas, really?

you should worry about your own army, which is under the control of the izraeli zionist colonial entity.

we dont care what you want.

only in Lebanon can we find a militia stronger than the army and deciding alone of peace or war...
in any other civilized country they would be traitors...

here too they are traitors