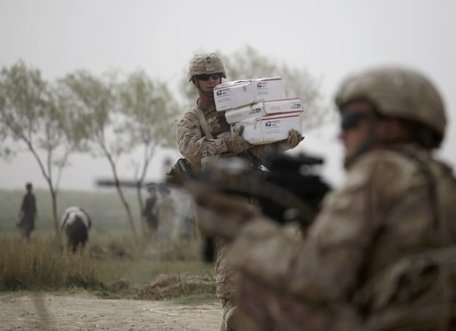 A top U.S. anti-terror advisor said America's anti-terror campaign must go beyond "hot" battlefields in Afghanistan but legal curbs could constrain its action.

"The United States does not view our authority to use military force against al-Qaida as being restricted solely to 'hot' battlefields like Afghanistan," Brennan said.

"We reserve the right to take unilateral action if or when other governments are unwilling or unable to take the necessary actions themselves."

However, Brennan added, "that does not mean we can use military force whenever we want, wherever we want.

"International legal principles, including respect for a state's sovereignty and the laws of war, impose important constraints on our ability to act unilaterally and on the way in which we can use force-in foreign territories."

The New York Times earlier quoted administration and congressional officials as saying that the Obama team was divided on the legal leeway the United States had in killing Islamist militants in Yemen and Somalia.

The paper said the discussion, pivotal to the future course of the anti-terror fight, centered on the extent to which Washington could escalate drone strikes, cruise missiles or commando raids from current high value al-Qaida targets to target thousands of extremist "foot soldiers."

Meanwhile, The Washington Post reported late Friday that the Obama administration had significantly increased the frequency of drone strikes and other air attacks against al-Qaida in Yemen.

Some of the strikes, carried out by the military’s Joint Special Operations Command, have been focused in the southern part of the country, where insurgent forces have for the first time conquered and held territory, the paper said.

Unlike in Pakistan, where the CIA has presidential authorization to launch drone strikes at will, each U.S. attack in Yemen and nearby Somalia requires White House approval, The Post said.

In his speech, Brennan also took issue with administration critics on Capitol Hill who are seeking to mandate that all terror suspects are treated as enemy combatants and held in military custody rather than in the civilian court system.

"I am deeply concerned that the alternative approach to counterterrorism being advocated in some quarters would represent a drastic departure from our values and the body of laws and principles that have always made this country a force for positive change in the world," Brennan said.

"Such a departure would not only risk rejection by our courts and the American public, it would undermine the international cooperation that has been critical to the national security gains we have made.

"Our counterterrorism professionals -- regardless of the administration in power -- need the flexibility to make well-informed decisions about where to prosecute terrorist suspects."

And, finally, as Brennan began to slow down and apparently prepared to end his remarks, the lowest-rated law graduate, a wizzened old man of twenty seven, rose from his chair in the first, and least prestigious, row of seats and said, "Pardon me, but could you define 'terrorist', sir?"
Whereupon Brennan looked over at the dean of the law school and asked, "What kind of law school are you running here, anyway?"