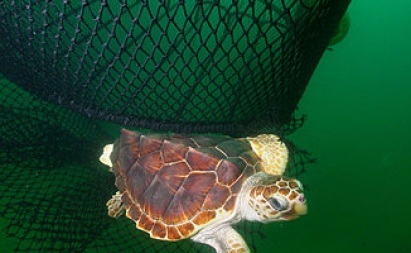 The United States issued a ruling on Friday saying that five world populations of loggerhead sea turtles are endangered species but four are only "threatened."

The decision to split up loggerhead turtles into nine separate populations for conservation efforts was detailed in a 331-page document by the U.S. Fish and Wildlife Service and the National Oceanic and Atmospheric Administration.

"Wide-ranging species, such as the loggerhead, benefit from assessing and addressing threats on a regional scale."

However, Oceana, a leading conservation group which had pressed for more protections for sea turtles, described the move as "bittersweet."

"While today's designation gives new hope for North Pacific loggerheads, it leaves the fate of the species in the Atlantic at risk."

Two turtle populations -- those in the Southeast Indo-Pacific Ocean and Northwest Atlantic Ocean -- were changed from endangered to threatened because their nesting areas are in protected lands and their numbers are stabilizing.

Improvements to fishing nets, which now include turtle excluder devices in shrimp trawlers allowing turtles to escape, have also helped save turtle populations.

Oceana and the Center for Biological Diversity were among the environmental groups that petitioned in 2007 for loggerhead sea turtles in the North Pacific and Northwest Atlantic to be reclassified as endangered.

"Loggerheads have declined by at least 80 percent in the North Pacific and could become functionally or ecologically extinct by the mid-21st century if additional protections are not put into place," said a statement by Oceana.

"Florida beaches, which host the largest nesting population of loggerheads in the Northwest Atlantic, have seen more than a 25 percent decline in nesting since 1998."

Earlier this week, a study in the U.S. journal Biological Conservation said that improved fishing nets have saved tens of thousands of endangered sea turtles in recent years, but 4,600 are still dying annually, mainly in Gulf of Mexico shrimp trawls.