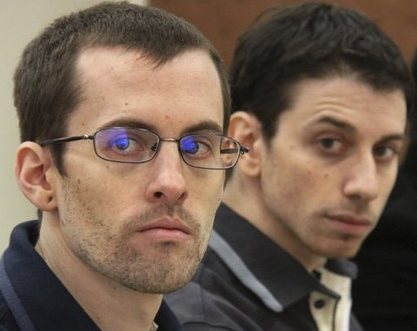 The lawyer of two American hikers convicted of spying in Iran told Agence France Presse on Saturday that everything was ready for their release, except for the signature of a judge to post bail.

"Everything is in place to post bail (for Josh Fattal and Shane Bauer) and to have them released, except for the signature of a judge" to post bail of $500,000 set by the court for each of them, Masoud Shafii said.

Iranian President Mahmoud Ahmadinejad said in interviews on Tuesday that Fattal and Bauer, who have been held in Iran after being arrested near the mountainous Iraq-Iran border in July 31, 2009, would be released imminently.

But the judiciary, dominated by ultra-conservatives, said on Wednesday that no decision had yet been taken and that it was studying a request by the lawyer to post bail.

On Saturday, Iranian Foreign Minister Ali Akbar Salehi said the judiciary had the final call on the issue, while expressing hope for a swift decision, Fars news agency reported.

"We hope the judiciary will announce its decision in the near future ... According to our information, the judiciary has the intention of reducing their sentences," Salehi told a press conference.

He also asked the U.S. government to "show goodwill" in response by releasing "the Iranians detained in the U.S."

The Islamic republic accuses the United States of illegally holding more than a dozen Iranian citizens in prison, some of whom have been charged with breaking international embargoes on Iran.

"We hope the issue is finalized in a way that the families of Iranians held in the U.S. as well as the families of the two American citizens receive good news," Salehi added.

Shafii told AFP on Wednesday that he had been officially notified by the court that his clients can be released after posting bail, but he still lacked the signature of one of the two judges who should validate his document before the process can be started.

Shafii said he had gone to the court on Saturday morning, but the judge in question was "absent," and he could not say when the missing signature would be obtained.

"I expect a call from judicial authorities," he said, adding that "everything is set and the bail is ready" for the early release of his clients.

He did not specify who would pay the bail, as the United States has no diplomatic relations with the Islamic republic.

Bauer and Fattal were arrested along with a third hiker, Sarah Shourd who left Iran in September last year after being granted bail on humanitarian and medical grounds.

Her bail had also been set at $500,000 and was paid through Oman, a U.S. Gulf ally that maintains friendly relations with Iran.

On August 21, Bauer and Fattal were sentenced to eight years in prison each by a revolutionary court in Tehran on charges of espionage and illegal entry. They have appealed against the ruling.

The three have consistently maintained that they innocently strayed into Iran while hiking in Iraq's northern Kurdistan region.

U.S. Secretary of State Hillary Clinton said on Thursday she was confident Iran would free Fattal and Bauer, and rejected concerns about the delay in their release.