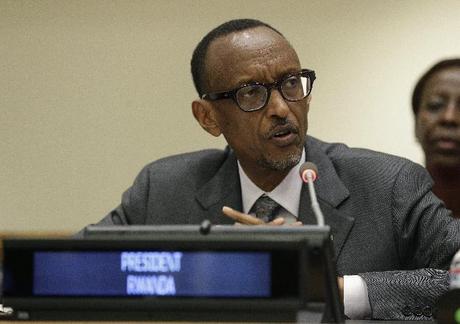 A campaign for Rwandan President Paul Kagame to seek a third term has begun with allies suggesting a constitutional change to allow him to run in 2017.

Kagame, whose Rwandan Patriotic Front or RPF -- a former rebel army that helped end the 1994 genocide and is now the major political party -- was elected in 2003 and 2010 and is therefore ineligible to stand again.

But smaller parties close to the RPF are being used to launch the case for a fresh mandate to avoid it being seen as a direct move by Kagame himself, critics claim.

"We do not accept the idea of ​​limiting the number of mandates because this is not democracy," Minister of Internal Security Musa Fazil Harerimana told AFP.

"Democracy is leaving the choice to the people," Harerimana added, speaking as the president of the Ideal Democratic Party (PDI), a small  within the ruling coalition.

The pro-government news website Ighie this month published an article in which three parties close to the ruling RPF -- Harerimana's PDI, the Party for Solidarity and Progress (PSP) and PS-Imberakuri -- suggested abolishing a cap on presidential terms.

Christine Mukabunani, PS-Imberakuri president, said the question should be put to a vote.

"If people agree to change the constitution, then we too agree," she told AFP.

PS-Imberakuri was once a vocal opposition party but its founding leader Bernard Ntaganda was pushed out after being jailed for threatening state security just before the 2010 elections in which he had planned to run for president.

"These parties are saying out loud what the RPF is thinking, they are the spokesmen of the RPF, they have pledged allegiance to them," said Ntaganda, released in June after four years in prison.

- A president who 'protects' -

But Kagame's supporters say he should stand again to ensure peace in a country which was ravaged by genocide and is located in a volatile region.

"We must continue with a president who can protect" the country and "ensure wolves do not interfere in Rwandan politics," wrote Harerimana in the Ighie article.

The "wolves" may be a reference to three former and serving army officers formerly part of the inner circle who were recently arrested, or aimed at critics who were once close to Kagame and are now exiled in South Africa.

A Western expert on Rwanda said the move comes against the backdrop of "rising dangers" to the regime and internal and external challenges to Kagame.

Kagame has skirted the issue of a third term.

In April, he vowed to abide by the constitution but said at the same time that it was "nothing more than the expression of the will of the people at a time and in a given context".

"I do not know of any country where the constitution is immutable," he said.

Kris Berwouts, an independent analyst specialising in central Africa, said it could be the case that Kagame's supporters were raising the issue to test domestic and international reactions.

Only the small Democratic Green Party, recently registered and with little influence in a country with no real opposition, has said openly it is against any constitutional reform.

"We do not support the constitutional amendment regarding the lifting of term limits for the president," party president Frank Habineza told AFP.

"We believe that respecting the term limits allows peaceful transfer of power, and avoids a scenario of a life president like in Zimbabwe."

Many suggest the real debate will take place within Kagame's RPF, which must consider the risk of criticism from foreign allies.

During the US-Africa Summit in August in Washington, the U.S. Secretary of State John Kerry called on African leaders not to amend their constitutions for "personal or political benefits."