Al-Rahi from Australia: We Pray Army Will Preserve Security in Lebanon 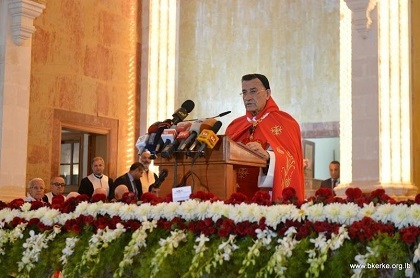 Maronite Patriarch Beshara al-Rahi voiced on Sunday his support for the Lebanese army, while condemning the attack against it in the northern city of Tripoli.

He said during his Sunday sermon: “We pray for the success of the military institution and security forces in preserving security and stability in Lebanon.”

He made his remarks during his ongoing trip to Sydney, Australia.

“We also pray for peace in Syria, Iraq, and the rest of the countries of the Middle East,” he added.

Lebanon has been without a president since May when the term of Michel Suleiman.

The clashes in Tripoli erupted on Friday where two civilians and two gunmen were killed and around 20 troops and civilians were wounded.

For the past few months, the military has been coming under increasing armed attacks, mainly in northern Lebanon.

Christians in Australia have realized the degree of treason of the caporal.

The politicians don't seem to be getting the memo. Why don't you retire as Patriarch and start a party with Suleiman, stage parliamentary elections, steal some seats from Change and Reform, end Aoun's boycott and get someone elected

There are 250,000 Maronites in Australia. He has an obligation to travel unlike Lebanese politicians who act as if each of them are the foreign minister.