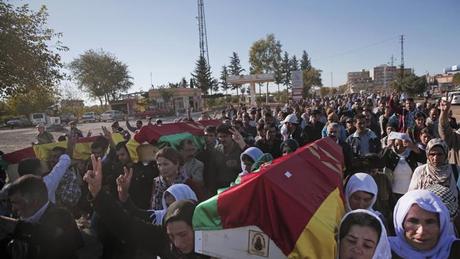 More than 800 people have been killed in ground fighting for Kobane since Islamic State group militants attacked the Syrian Kurdish enclave on September 16, a monitoring group said Sunday.

The jihadists have lost 481 dead, while 313 Kurds have been killed fighting to defend the area, the Syrian Observatory for Human Rights said.

The figures do not include IS losses to U.S.-led air strikes, which the Pentagon has said run to "several hundred."

Civilians accounted for 21 of the dead. The jihadist assault prompted nearly all of the enclave's population to flee, with some 200,000 refugees streaming over the border into neighboring Turkey.

Kurdish fighters have kept up a dogged resistance inside the border town, buoyed by coalition air support and U.S. arms drops earlier this month.

we make cobane the biggest fire to burn satan in the form of isis and his turkish supporters.

lol "kurd kobane". someone had to come up with this

The Kurdish fighters of Kobane are worthy of our 100% respect. They are outnumbered, outgunned yet these brave people are fighting like real Lions. Because of their singular courage, Kobane will be liberated, and the evil Al Jursa, Al Nusra and ISIL terrorists will be defeated. It will be from there that these evil pigs will start seeing one defeat after the other. God bless Kobane, God bless the Kurds, God bless the Peshmerga, the PKK, and may soon be there a Full Republic of Kurdistan. It is the full right of the Kurd people, once Kobane is freed, the road to freedom will begin.

Erdogan will do everything he can to thwart Kurdish victory, though.