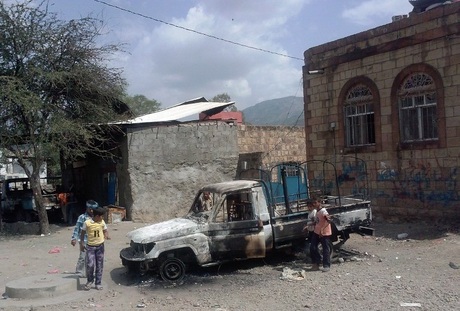 Yemeni troops and a U.S. drone struck positions held by Al-Qaida suspects and Sunni tribes on Sunday killing over a dozen insurgents who have been battling Shiite rebels, tribal sources said.

The rebels, known as Huthis, have been facing fierce resistance from Al-Qaida fighters and tribesmen as they seek to expand their areas of control after seizing the capital Sanaa and the Red Sea port city of Hudeida.

Clashes broke out on Friday evening when Huthi fighters trying to wrest control of the mountains around the central town of Rada, in Baida province, met resistance from Sunni militias, tribal sources said.

On Sunday, the rebels took over several of these areas after a suspected U.S. drone and army jets raided the positions held by Al-Qaida and the Sunni tribesmen, tribal sources said.

One source said that "20 Al-Qaida militants" were killed in the strikes, although the toll could not be confirmed from independent sources.

The rebels took control of Sanaa on September 21 after orchestrating weeks of protests that paralyzed the government.

They then pushed south earlier this month, meeting little or no resistance from security forces.

But as their advance has taken them out of the mainly Shiite northern highlands into predominantly Sunni areas, they have met increasingly fierce resistance from local tribes as well as Al-Qaida.

Yemen is a key U.S. ally in the fight against Al-Qaida, allowing Washington to conduct a longstanding drone war against the group on its territory.

The Huthis have seized on chronic instability in Yemen since the 2012 ouster of long-serving autocratic president Ali Abdullah Saleh to take control of large parts of the country.

The latest fighting has raised fears of Yemen -- located next to oil kingpin Saudi Arabia and important shipping routes in the Gulf of Aden -- collapsing into a failed state.