Saudi to Nasrallah: The Parties Embracing Terrorism Have Become Well-Known 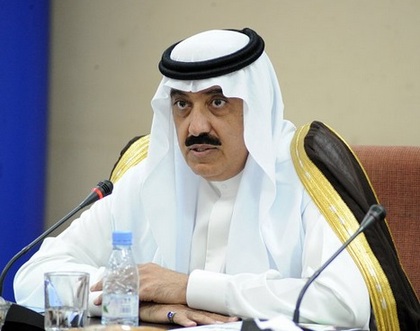 Saudi Arabia stressed Thursday that it was the first country to engage in the fight against terrorism, in an apparent response to recent remarks by Hizbullah chief Sayyed Hassan Nasrallah.

The kingdom was “among the first states that fought terrorism and suffered its attacks,” Saudi National Guard Minister Prince Mutaib bin Abdullah said.

“I believe that the parties embracing and supporting terrorism have become well-known,” Mutaib added.

Saudi Arabia's state-run news agency SPA did not publish the minister's statement, but the Saudi-owned Al-Arabiya TV described it as a response to Nasrallah's remarks.

Hizbullah's chief had on Monday said that Saudi Arabia must shoulder a bigger responsibility in the fight against the extremist ideology of the Islamic State group, noting that military efforts alone cannot eradicate the jihadist organization.

“Nowadays, the prime responsibility in the Islamic world for stopping the proliferation of this ideology falls on the Kingdom of Saudi Arabia,” Nasrallah said in a televised speech.

“It is not enough to create an international coalition and bring the armies of the world to fight ISIL (Islamic State). My remarks are addressed to everyone: close the schools that are educating the followers of this ISIL ideology … and stop labeling people as polytheists for the most trivial reasons,” Nasrallah added.

In June, the IS declared an "Islamic caliphate" straddling vast swathes of Iraq and Syria, ordering Muslims worldwide to pledge allegiance to their chief Abu Bakr al-Baghdadi.

The U.S. has formed a coalition of Western and Arab allies to battle IS, which has been accused of widespread atrocities in Iraq and Syria, including mass executions, beheadings, rape, torture and selling women and children into slavery.

Most trivial reason? Asking dead imams for help and making images of them and giving them super powers isent polytheism? Maybe not in shiaism but it sure is in Islam.

Salafists who worship the king of Saudi Arabia are now speaking on behalf of Islam? Now I've seen it all.

The enemy from within is more dangerous than the external enemy

M11er, I don't think the Saudi people are all that happy with their lives. That's why when all the Saudi women come to Lebanon they take off their hijab and niqab as soon as they land in Beirut. Also, a lot of Saudis go to Bahrain and Dubai just so they can enjoy a nightlife. There is only one cinema in the entire KSA.

lol you're so delluded it's funny. go live in saudi if you think it's lalaland

Prime Minister Nuri al-Maliki said Monday that 90 percent of foreign terrorists who infiltrate Iraq did so via Syria. AFP 2009 09 01

"Iraq's foreign militants 'come from US allies'"
"In all, 305, or 41%, of the fighters listed were from Saudi Arabia. Another 137, or 18%, came from Libya. Both countries are officially US allies in anti-terrorism efforts."
http://www.theguardian.com/world/2007/nov/22/iraq.peterwalker1

so what? means those countries sent them? irrelevant post as usual...

i see that you use western sources but when i use them you dismiss them saying they are lies... seems you just use them when it suits you... proving once more that you are not credible...

yup they came from Libya hahaha yeah through that porous Libyan Iraqi border, that's priceless mowaten just priceless get a globe man get a globe hahaha
ya poor boy can't tell the difference between they came as the nationality of the fighters and came as in entered and how they got into Iraq

100% of them entered from Syria with the help and blessings of one Bashar Assad self proclaimed number one US allies in anti-terrorism efforts.

Yes, I'm sure he knows himself and his senile King, no?

Who is financing Mosques in France, for exemple, till Tahiti in the french polynesia where there are no muslims at all? KSA.
They are practicing proselytism toward their religion, so maybe they are not forcing you to live their way, but for many others, they are forcing them in the end to live their way.

lol at your BS propaganda accusations coming from the US-israeli STL masquerade. we paid them hundreds of millions and they still havent found a single evidence btw.

we're basically paying them to disinform us and try to divide the country.

Oh really momo!? The stl has not found "a single evidence"... hmmm... from what I hear they have hundreds, and are building a case, the way it should be done, ... and you know what ... Wissam Eid had lots of proof but..."someone" took him down...

Saudis are not saints... many of their quranic universities or schools preach for a fundamentalist islam, yet they don't budge!

Another lie. Saudi sponsored the takfiris for years now, the Resistance fought Sauds terrorists since May 2013, Saudi joined the U.S coalition a month ago to attack their own ISIS mercenaries.

Unlike Syria that was one of the best arab countries to live in, until Saudia destroyed it.

yea, from "what you hear" that's what they say. now if you actually look at what they announced having, it's tons and tons of gossip and nothing much more. besides that they presented theirblue and pink and fuschia cells theory but were unable to say who bought the phones or who bought the numbers. all they could say is that they were bought in tripoli.
same goes for the "white pick up truck", they cant say who was driving it or even who bought it, only that it was (again) bought in tripoli.
this is not to mention all the fishy events that stain the history of that court, the protection of false witnesses, the videotaped bribe-takings, basing the case on telecom data while ignoring the fact that israeli spies had infiltrated the telcom servers and taken full control over the databases.

in my opinion, whatever wissam eid had must have come in contradiction of what the court is saying, his investigation was based on mobile network data that was taken earlier than the STL, and probably before the israeli spies had doctored them. if he was going to conclude the same thing as the STL, there would be no point in eliminating him. if he was going to contradict them, then he would have become a menace.

funny how can people be soooo sure there are no evidence... usually the evidence are used in court where they are produced... never before!
so those M8ers trying to prove they know better are once more caught in their propaganda and desperate at the issue of the STL....

sa7 el nom peace! the proceedings started in june this year, andeverything i said here is based on the statement of the prosecution made in the court.

but hey, let me know when you actually see those proof you are soooo sure exist

evidence are always produced in the court not before... when have you seen evidence brought before the day of any trial? LOL

hey! you cannot read what i wrote or is it too difficult for you to understand?

yea, and THE TRIAL HAS STARTED and what i said above comes directly from the PROSECUTION'S STATEMENT.

gee, like talking to a wall. only the wall doesnt think he's smart...

Saudi is still financing the Sunni radicals and extremists, and Iran is still financing the Shiite militias. When one side feels the other is getting more support, the other props up the ante. But this is already showing its limits, the war in Syria, the potpourri and fruit cocktails of foreign interference, it will all end very badly one day, and the only beneficiary remains Israhell.