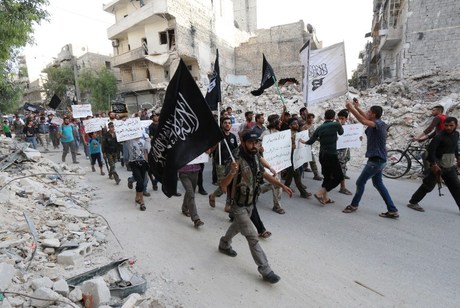 Fighters from Al-Qaida affiliate Al-Nusra Front have driven rebels of the Western-backed Syrian Revolutionary Front from their bastion in the northwestern province of Idlib after 24 hours of combat, a monitor said Saturday.

The defeat, in which some of the SRF fighters deserted and joined Al-Nusra, is seen as a blow to U.S. efforts to create and train a moderate rebel force as a counterweight to jihadists and the forces of Syrian President Bashar Assad.

Al-Nusra captured Deir Sinbel and also controls most of the other towns and villages in the Jabal al-Zawiya area, said the Syrian Observatory for Human Rights.

It "seized SRF arms and tanks, and some of the rebels swore allegiance to Al-Nusra, while others fled," the Britain-based organization said.

The Observatory said Al-Nusra was backed by jihadists from the Islamic State (IS) group in the operation, though the two organizations are fighting each other fiercely elsewhere in Syria.

IS, a radical Sunni Muslim group, has seized large swathes of Syria and Iraq, committing widespread atrocities and proclaiming an Islamic caliphate in territory it controls.

The SRF, backed by the West and various Arab countries, favors the establishment of a democratic state in a post-Assad Syria.

It was formed at the end of 2013 as an alliance of moderate rebels. It was hoped that its chief, Jamaal Maarouf, would spearhead the formation of a nationwide force capable of challenging not only the jihadists but also the regime.

With the loss of its bastion in Idlib, the SRF now only has a presence in southern Syria.

On Friday, activists published a video showing Maarouf addressing Al-Nusra leader Abu Mohammad al-Jolani, saying: "You have tarnished the name of Islam, and you have tarnished religion. Why do you fight us? Go away, fight the regime!"

He added: "You are nothing; you are just like Baghdadi... you bastard."

Maarouf was referring to IS chief Abu Bakr al-Baghdadi.

Al-Nusra hit back on Twitter, accusing Maarouf of "corruption" and of "straying from the path of the revolution".

Idlib province was among the first areas to fall from government control, soon after the outbreak of a revolt against Assad's in 2011.

It's like FSA-Al Qaeda never went around massacring Christians/Alawites/Shia/Druze, pillaging churches. eating human hearts, etc. No no no, it was all lies!

In photo above, there is no sign of a AK-47 not even a slingshot..Ther was no combat.. I don't know who your source is
Cut the BS Please: A Muslim is a Muslim is A Muslim, regardless of gang affiliation.. All the rest is decor.
Naharnet: Please remain true to the large picture. Remember the freedom of speech.