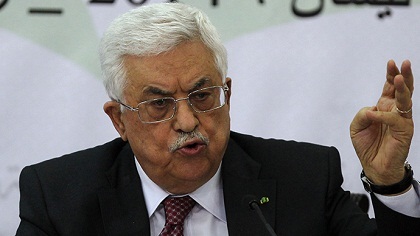 Palestinian President Mahmud Abbas has outraged Israeli leaders by calling the attempted assassin of a Jewish ultra-right-wing rabbi a "martyr" and the soldiers who killed him "terrorist gangs".

Abbas on Sunday sent a letter of condolence to the family of 32-year-old Muataz Hijazi, killed by Israeli police who said he had tried to murder Yehuda Glick.

The U.S.-born Glick, who was seriously wounded in the shooting attack, is an ultra-nationalist whose demand that Jews be allowed to pray at the Al-Aqsa compound in east Jerusalem outrages Muslims.

The compound -- which Jews call the Temple Mount -- is the third holiest site in Islam and regarded as the holiest in Judaism as the location of the first and second temples.

In his letter, which AFP has seen, Abbas expressed his "anger and condemnation after news of the criminal, despicable assassination by the Israeli occupation army's terrorist gangs of Muataz Ibrahim Khalil Hijazi, who died a martyr defending the rights of our people and the holy places".

"While we are trying to calm the situation, Abu Mazen (Abbas) sends his condolences on the death of a man who tried to commit a despicable act," he said.

The Israelis and Palestinians accuse each other of fanning the flames over east Jerusalem, the occupied Arab sector of the Holy City conquered by the Jewish state in the 1967 Six-Day War and later annexed.

Glick was leaving a debate on the status of the flashpoint compound late last Wednesday when he was shot by a man Israeli police said was Hijazi.

Foreign Minister Avigdor Lieberman said the letter of condolences to Hijazi's family showed that Abbas was "a partner of terrorism, terrorists and murderers".

Justice Minister Tzipi Livni, a cabinet moderate who was Israel's chief negotiator in abortive U.S.-brokered peace talks with the Palestinians, told public radio that Abbas was "playing with fire".

"You can't on the one hand go round saying you condemn violence and on the other hand send letters encouraging it," she said.

Israel : you are idiots not to make peace with Abbas...