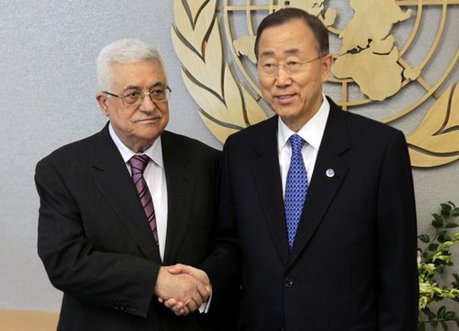 Palestinian leader Mahmoud Abbas officially told U.N. chief Ban Ki-moon that he would be submitting an application for membership in the global body on Friday, a U.N. spokesman said Monday.

Abbas and Ban also discussed international efforts to avoid a showdown over the bid in a meeting hours after the Palestinian leader's arrival in New York on Monday to make the bid for U.N. recognition of a Palestinian state.

The United States has vowed to veto any application to the U.N. Security Council which must support any membership.

"The secretary general informed president Abbas of his intention to perform his duties under the U.N. Charter."

In response, Ban "stressed his desire to ensure that the international community and the two parties can find a way forward for resuming negotiations within a legitimate and balanced framework," Nesirky told reporters.

Ban "discussed with president Abbas the ongoing Quartet efforts in this regard," the U.N. spokesman said, referring to the diplomatic Quartet on the Middle East comprised of the United States, Russia, the European Union and the United Nations.

"President Abbas stressed his commitment to a negotiated solution," he said.

The 15-member Security Council must support any Palestinian bid for full membership of the U.N. But the U.N. General Assembly could decide alone to give enhanced observer member status and no veto is possible.