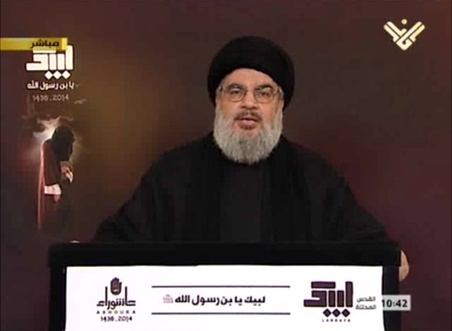 Israel's Transportation Minister Yisrael Katz has warned that Israel would return Lebanon to the stone age if Hizbullah attacked the Jewish State.

“In order to avoid any doubt on the matter, (Hizbullah leader Sayyed Hassan) Nasrallah the cowardly braggart should know this: that option does not exist for us!,” Katz wrote on his facebook page, according to Israeli media.

“If such a scenario does materialize, we will raze Lebanon to the ground! We will return it to the Stone Age and bury (Nasrallah) under the rocks,” he said after a fiery speech by the Hizbullah chief on Ashura.

Nasrallah said Tuesday that “Israel's threats of another war on Lebanon do not stem from its power because it has lost hope and is concerned.”

He reiterated that Hizbullah “is fully ready in southern Lebanon” despite the presence of the party's fighters in Syria.

“You should close all of your airports and your ports because there is no place extending on the land of occupied Palestine that the resistance’s rockets cannot reach,” Nasrallah warned.

We are already in the stone age... unfortunately

not as much as you troll

to katz: Lebanon is has been returned to the stone age thanks to hizbushaitan.
if you execute what you say for once, then we will recover our Lebanon and will make it prosper again.

thus you will be doing us a favor by finally eradicating these extremist terrorist Iranian militia.
that is hijacking our country.

sovereign geha begging the israeli to raze lebanon to the ground, then when someone accuses geha of treachery, she violently denies it. ghareeb!

and when he's not begging israel to kill his fellow lebanese, he's begging nusra & isis. what a patriot! :)

Salim, yours is one of the savviest posts I've seen in a long time, smart, savvy and sharp.

“If such a scenario does materialize, we will raze Lebanon to the ground! We will return it to the Stone Age and bury (Nasrallah) under the rocks,” .............
Razing Lebanon to the ground is what HA has been doing for decades. If Israel wanted to get HA and Nasrallah, they could leave Lebanon alone and flatten Dahye where Nasrallah is. The HA/Israel charade continues.

We need a Peaceful and Prosper Lebanon.. We don't want to fight anyone nor anyone fighting us..
We want jobs, security, oil, gas & Love...

and of course the resistance

What worries me is that HA wants to launch a war with the precise aim that Lebanon will be entirely destroyed....

ridiculous, nobody fought as hard as hezbollah to defend and liberate this country

no, defend iranian interests in Lebanon which is totally different mooowaten...

and what are those "iranian interests" exactly? liberate the south? deter israel from their agressions on us?
it's easy to throw propaganda lines around but they dont stick.

i don't expect anything to stick on you as a brave little hezbi soldier you are....

but anyone with common sense can clearly see that hezbollah takes the defense of Lebanon as a pretext to be the armed soldier of iran here....

and israel always threaten hezbollah never Lebanon in case you have not noticed... so hezbis are defending themselves, not Lebanon but just bring destruction upon us and you are so proud of it!

yes, israel does not threaten lebanon, as the title of this article indicates:

just take a hike peasse, you're ridiculing yourself.

Sayed Hassan, your rhetoric is too fiery, anyway, we're used to you now. Israel, no surprise this time again, you too stop the concert, it's getting way too long in the tooth now.

We've heard "Israel" say that before, only thing that is holding Israel back, is the retaliation that the Resistance, will swiftly provide them.

HA and Israel are in bed together. Israel is intent on weakening Lebanon to aid HA in becoming the dominant force. They did it in 2006 and will do it again if needed.

Mystic, all I can is this: The ballet dance between Israel and HA is a tune that has become too old, too stale, no matter how sweet a song may be, play it all day long, soon after people will get bored. This is exactly how I and most Lebanese now feel.

That's not what you said a few days ago Phoenix, back then you almost begged for no war between the two.

What a joker!! The Resistance is primarily resisting fellow Muslims, and not Israel

"Israel Threatens to Return Lebanon to Stone Age after Nasrallah Speech".......Yes, it is time for their war criminals to go to Nurenburg. No one is afraid of you and your terrorist state.

Most of the killings and destructions in the region are caused between natives because of the collaborators, opportunists, and enemy of the people. We need to stop worrying about resisting the Israeli enemy and the foreign Takfiris. We natives must STOP the divide and conquer schemes by the Pro Zionist colonialists & their puppets and work to achieve POLITICAL UNITY like they have in the West by getting rid off Puppets and collaborators. This is what MOST of the Natives want in the region.

What a brave soldier!!! So you will get rid of your Pro-Iranian puppets and collaborators?

no difference between the israeli rhetoric and hezbollah's! two extremists sides of the same coin.....

good luck with that but we are getting there ourselves without any help.

what do they mean by stone age? as in lack of law, no water or electricity? worship anything that moves? Our Resistance has ensured that we have all of the above on behalf of Israel.