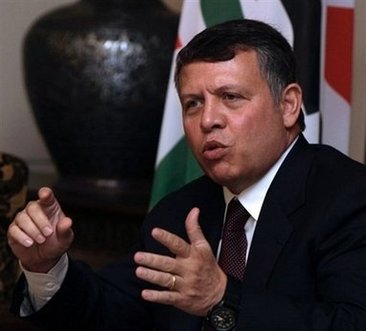 Jordan's King Abdullah II has warned that Israel's stance in peace talks with the Palestinian is fuelling instability in the Middle East, in remarks published Tuesday in The Wall Street Journal.

"If we can't get the Israelis and Palestinians together in this next couple of days, then what signal is that for the future process?" King Abdullah asked in a WSJ interview in New York ahead of the U.N. General Assembly.

The Jordanian ruler said that while he had been encouraged at times by Israeli Prime Minister Benjamin Netanyahu's "positive statements," the reality on the ground was disappointing.

"I think my best way to describe my view toward Israel is my increasing frustration because they're sticking their head in the sand and pretending that there's not a problem," said the monarch, whose country signed a peace treaty with Israel in 1994.

His comments came as Palestinian president Mahmoud Abbas vowed to seek a vote on U.N. membership for a Palestinian state this Friday, setting up a collision with the United States and Israel.

Washington has already said it will use its veto if the U.N. Security Council votes on the issue, while Netanyahu on Monday urged Abbas to hold direct talks in New York ahead of the showdown.

In the interview, King Abdullah also said the regime of Syrian President Bashar al-Assad was contributing to the instability in the region.

"I have talked to him (Assad) twice in the first part of the year to discuss about the challenges we are facing and how we could be supportive in lessons learnt, but at that point the Syrians were not really interested in what we had to say," he told the WSJ.

According to U.N. estimates, at least 2,600 people, mostly civilians, have been killed in the Syrian regime's crackdown on pro-democracy protests since mid-March.

"On the issue of political reform, yes and again four months from now, God willing, I want to feel much better," he said.

Jordanian MPs are currently debating constitutional amendments proposed by a palace-appointed committee and announced by the king last month.

The recommendations include the creation of an independent commission to oversee elections, lowering the age of candidates for parliament from 35 to 25 and limiting the jurisdiction of the military state security court, accused by activists of being illegal, to cases of high treason, espionage and terrorism.

"I think that we are way ahead of the curve because we have a plan, and the job of the leaders is to make sure that government and parliament stick to those benchmarks so that we have a new Jordan as quickly as possible," the king said.

"I do not know if that could be said for a lot of countries in the region, some of them maybe going from an Arab Spring to an Arab Summer to an Arab Winter and maybe it takes a while for them to come back up to the Arab Spring again."